Leaving Bhaglapur was one of the best things that we did today. Oh and shooting sunrise over the Ganges. Hotels really don’t understand much western reasoning. I think the weirdest thing is that most hotels aren’t quite completed before their rooms are put up at full price. It’s strange to us, but surprisingly normal here. There’s tax cuts for not finishing a building, so most places finish construction but leave a few key things like boardrooms or proper rooftops, unfinished.

It was the Hotel Charmayne Inn Bhaglapur. Sharing a building with a whitegoods shop. It looked swanky from the outside, but inside it was yet another collection of kitsch indian design and a low-rent budget. Camphor balls in the bathroom made it smell like a urinal, not-quite-complete tiling that was a little messy, but did the job. The thing I hate the most about indian bathrooms are the shiny tiles. They’re so freaking slippery especially when the act of showering involves filling a bucket, washing yourself with soap, and then tipping more hot water (or mostly cold) over yourself until you’re washed. This makes for an old-fashioned slip and slide on shiny tiles. Hope you like a split head.  Because a lot of the country live in abject poverty, those who have jobs make sure that they keep them. In most of these “pricier” hotels, you’ll find you have a staff member that does the things – this person will top up your water glass, offer you a new piece of Roti when yours has been eaten, even if the basket of bread is sitting right next to you on the table. No, you can’t take it yourself, someone is employed to put it on your plate. Same if you’ve finished eating but there’s still some curry in the bowl, “You haven’t finished it, you can’t be full, here ma’am, eat more, what about dessert?” The only way to say no is to walk away.

Knocking at the door at 11pm. Everyone wakes from their slumber in a groggy state, knocking again. Nope. Not dreaming this one. Bevan opens the door and there’s two staff there, “Water sir?” They woke us up to give us another bottle of water, which we will probably pay for.

It’s like being a baby again, except nobody will be there to wipe your bottom.

Mostly you’ll find strange drainage issues, leaky roofs and light switches that don’t do anything. It’s a good hotel if the electricity stays on constantly. Every town in India usually sees the power go out intermittently. Usually you’ll be going about your thing, washing your hair in a slippery bathroom, working on your laptop, trying to get 5% charge into your phone, or in my case, riding the elevator – when the goddamned power goes out!!!

It was at this point my heart stopped. The elevator was big enough for 3 people, it was dark, there was no call buttons and the doors opened between the floors. My heard began to race and just as I started to feel the panic creeping in, the power comes back on and the lift continues to the ground floor. After that I make a promise to myself not to take any more lifts in India and use the damn stairs. At least they don’t rely on power to operate.

India is not without its share of crazy festivals, the orange-dressed Shiva’s had taken over the streets on their month-long pilgrimage to the Ganges to celebrate monsoon – or something like that. Nobody could really accurately tell us what was happening in English. Our hotel manager had mastered the word “yes” and so this was his answer to everything. These crazy orange-cloaked people, about a million of them – that’s how many crazy mofos are on the road driving like they have nine lives. They’re a very loud and proud cult, not only by choice of Pantone shade of their garments, but by their presence.

They drove down the streets of Bhaglapur with several trucks stacked high with sound monitors. A sheer wall of speakers pumping some kind of trance-ish hindi EDM and them sitting right beneath it, for hours on end. No wonder they’re deaf. The music would have been rather enjoyable if it wasn’t forcibly shoved in my ears along with the medley of truck and bus horns, bikes and cattle all contending for a piece of road real estate.  It’s maddening and dangerous and requires the body to produce its own Red Bull in order to stay alert and watch your six.

When we finally got out of dodgy, we decided to take the road less travelled and less mapped. It was a left or right option. Right was on the map, as was left, but our road atlas only had left and google maps had right. We chose Right because the road was smaller, and there was less chance of being harassed by bus drivers whose only intent was to make us scared.

Because of this gamble, we ended up in some of the most serene landscape I have experienced thus far in India. Bizarrely, we found gum trees lining the road, palms and an expanseful landscape of rice fields and farmers grazing cattle. This went on for 70km or so, and by the time we got to the end of it, we had been hit by the same thunderstorm four times. Each time it pelted down roads and flooded the potholes. It was by now that our windscreen wiper had given up the fight and was merely a hood ornament designed to distract, it wasn’t serving a purpose. There were less trucks and heaps of crazy idiots stacked high on cars and dressed in orange.

It was a long day, but a mostly pleasant one. Mostly...

Lunch was a roadside stop to find some Samosas, as was our usual ritual. I don't know where we had stopped, the town names aren't automatically in the town or on a sign. Not long after stopping, we were mobbed by tens of Indians keen for a peek at the white tourists in their little village. I'd gotten into a habit of sitting inside the Rickshaw and wearing one of my rings on my wedding finger. Women travelling alone in these parts is something of a red-flag to some in the less populated cities. It's just easier to avoid the riff-raff in this way. While Miss Bev went and searched for food, Mr Bev stayed with me and the rickshaw, being a human shield for the locals coming out to take a look. A little while later she comes back with some food for all of us, and we eat it in the Rickshaw before continuing on our journey.

The journey was uneventful for the next hour or so. We had travelled some distance from Baghlapur, and were trying to make it a few more hours south when I felt the hot, sharp rushing feeling in my intestines. I mentioned to the Bevs that I'd like to take a toilet break sometime soon, whenever a public restroom was easily found. I'm fine for a decent minute or two until I realise that that hot, rushing, sharp, immediate pain wasn't going to end in a leisurely bathroom break.

The bumps on the road are plentiful and my butt cheeks have the memory of trip firmly implanted in their muscles. My stomach is now in incredible pain as I try to hold on, but realise one of two things are going to now happen: 1) I won't make it to a restroom 2) I'm going to have to 'go' whereever I can find. I tell Miss Bev that I simply cannot wait. I . Literally. Can't. I can feel the hot, sharp, rushing pain move closer to earthside as I unclip my BlackRapid camera strap, hand the camera and the strap to Bev and scream "Stop , Stop, Stop!" Mr Bev pulls aside and I vaguely remembering "I need to go to the toilet now!"

Miss Bev is on foot behind me as I stumble out of the Rickshaw, searching desperately for any sign of a public toilet. Met with a wall of houses, I'm frantically looking up alleyways, into peoples homes all while trying to hold my buttcheeks clenched tight. It's a losing battle. I run two houses  up the street and spy a cow in a paddock. BRILLIANT~ Cows poop in the paddocks all the time, what's the difference. It's behind a tall-ish fence and I'm sure it will afford me the luxury that I crave. I find a wall to lean against and squat down. Bev is hanging out at the gate, making sure nobody can come and interrupt me.

Almost instantaneously, a wall of hot, sharp, acid-like, maybe more napalm-like slop leaves my sore butt and I sigh in relief as the evil makes its way onto the ground. I'm afforded briefly around 10 seconds of peace before I'm interrupted. Bev has been holding back a hunched-back angry lady who is yelling at me in Hindi. Soon her whole family joins as they tilt their heads to examine the liquid that I have pooped against the wall of their house. We try and find some common language so I can tell her that I'm genuinely, truly sorry, but alas there is none. She's getting angry, her sons are getting angry and tensions are not easing. I ask bev to chuck me the wipes and they land pleasantly next to my feet. She chucks over a bag too, but looking at my leavings, there's no way I can scoop up poop soup with these wipes. I clean up my butt and throw the wipes in a bag, very slowly while communicating with Miss Bev, the new plan.

"Tell Bev to start the rickshaw, now" I say to bev. We're going to have to leg it. I'm slowly packing up my wipes into the bag.

"Now when we're done, I'm going to pretend that I'm going to clean this up, but really, we're going to RUN for the rickshaw."

I continue to try and say I'm sorry to the angry lady who is shouting in furious hindi at me. You don't need to be an expert on language when someone is really, really pissed off.

I pick up my pants, and delicately, the bag containing my soiled wipes. "Ok lets go" I say to Bev. I move towards the gate, continually apologizing in English. We turn and spring to the Rickshaw. The more-athletic villagers chase us, and almost, rickshaw stalls, but starts again as we leap out of there and don't stop to say sorry for the billionth time. I feel like a jerk but I had no option.

Later that night I take a decent shower and we're all so exhausted that we fall asleep in the soothing air conditioning of Hotel Orbitz. The rickshaw fully broke again this afternoon, and with our afternoon cut short, limped it into Giridih.

There’s so many photos and yet so far to go. I’ll be definitely sorting photos for months after this trip. 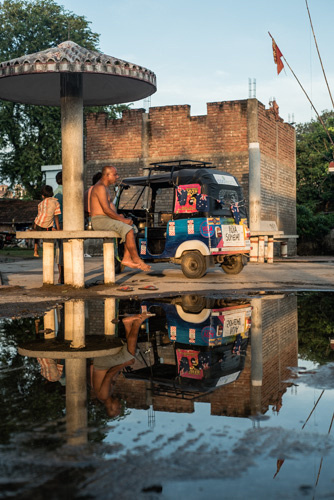 The tuk parked at the ganges view with locals. 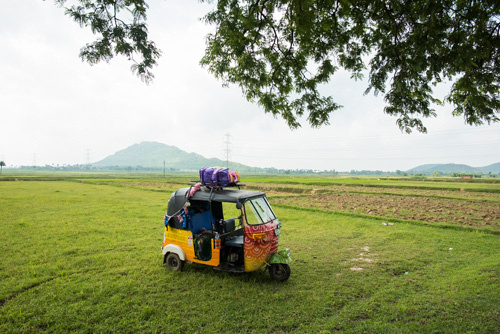 Under the shade of a tree after escaping the crazy towns. 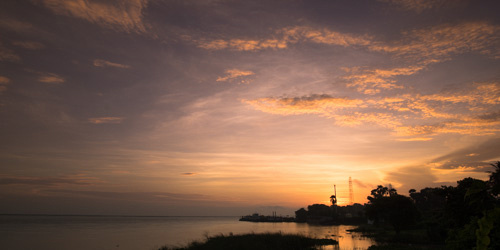 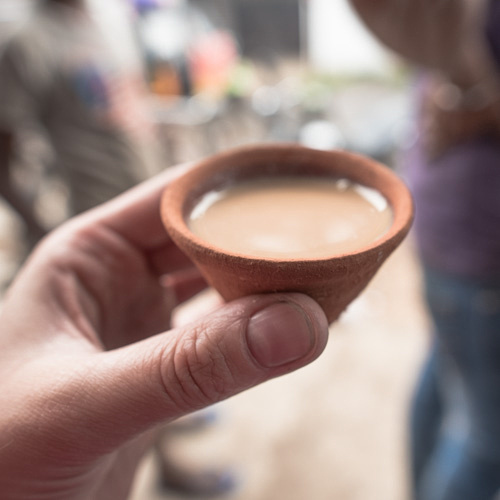 Chai is served in terracotta cups here. more hygenic and they throw them away. We kept ours though. They'll remind me of this city, always. 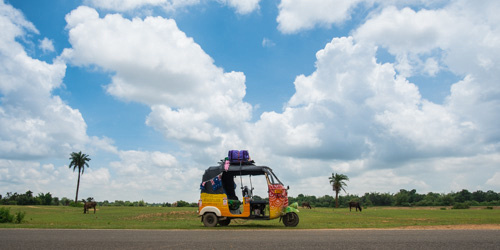 The open road and our glorious steed. 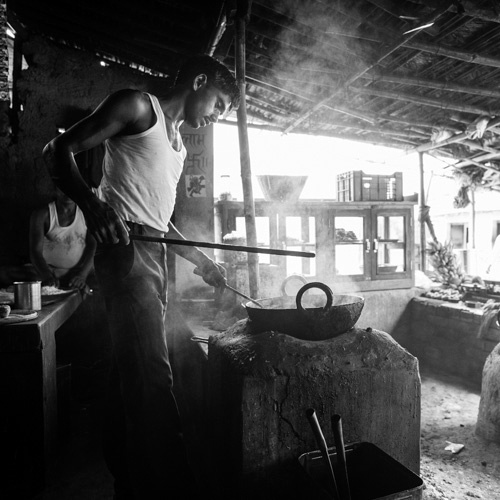 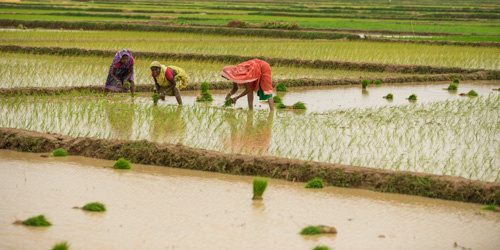 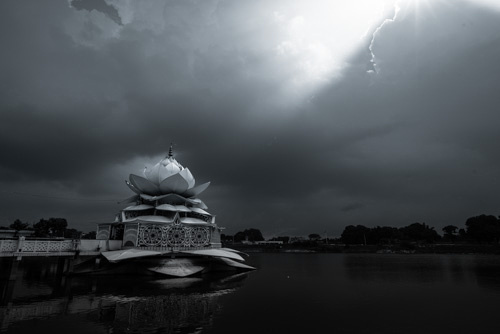 The Lotus temple, with thunderstorm.