I’M REALLY OVER THIS COUNTRY TRYING TO TAKE A SELFIE WITH ME, TRY TO RUN THE TUK OFF THE ROAD AND THEN ATTEMPT TO GET AWAY WITH IT.

Throughout the last couple of days, India has really drummed into me, how lucky I am to live in Australia. Sure, things are massively more expensive than here, but the way of life, the social liberties and the cleanliness of our society is so much better than what it is here.

Think about it for a second, rules of the road, enforced by police. What a luxury!

Don’t get me wrong, India has been a whirlwind; an overload of information, concepts and ideas. Simple things that we take for granted are luxuries in Australia; a cold drink, fresh ice cubes and pristine white beaches. So why the deep and meaningful?

For the last few days, we’ve been conquering the long, never-ending highways. The endless concrete landscape doesn’t offer up much for the budding landscape photographer, so there’s heaps of time to think and ponder.

I’ve been in India for nearly 3 weeks so far, and the sheer overload is exhausting. This is a visual overload, as well as mental. There’s things that they do here that we’d get in trouble for at home, and there’s other things that happen here that I wish happened at home, so that contrast is difficult to deal with at times.

So, what do I love, so far, about India:

Cheap price of food and massive variety and availability. Mind you, the variety changes from state to state, and sometimes there’s no room for fussy eating, it’s this or nothing. I can deal with that.

This place has heaps of potential for a serious photographer. I really want to come back sometime and do it properly. For the kind of the event that we’re doing, there just isn’t time to stop in some of the more beautiful places to really do them a justice. I see shots all the time that I want to take, but they’re going to have to wait until later.

How foreign tourists are like trading cards. Everyone wants a selfie with a tourist, probably so they can talk to their favourite grocer in the morning about the foreigners who were in town yesterday and here’s that photo. I don’t know why it annoys me so much, it just does. I really don’t like the extra attention that I get here at the moment. I’m just not that kind of person that can wave and say hello to everyone, I have to be in the right mood. Mostly though, it’s been a space invasion. They want photos with me but they don’t want me to take their photo.

If we in Australia treated tourists like that, it’d be frowned upon. But here, we’re trading cards, just another thing to be consumed by it all.

The scariest part of today has been driving the back roads.

They’re bumpy, badly kept and there’s no lines, meaning no strict enforcement of space and equality. So add to this, when a car goes to pass, the passengers notice that yup, we are indeed WHITE PEOPLE.

And so they drive dangerously close to the tuk, verge in and get as close as possible, while still driving at 60kmh, regardless of whether they’re running us off the road, to try and take a picture. Of us. In our tuk. At speed. This has happened several times today, something of which should be water off a ducks back. But it’s not. It’s really, really getting to me because each time they do this, it puts our lives in danger because we’re in a tuk with no airbags, and they’re in their cushy air conditioned airbag sedan. We’re the animals on their safari.

This has also happened with motorbikes. They overtake, cut us off in attempt to drive us off the road, and then they stop motioning for pictures on the side of the road.

Two days ago, when driving from Chandipur Beach to Visaparatnam, a local Press/Media car tried to do the same thing. Over and over, overtake, cut us off, pull to the side of the road and try to get us to talk. They tried this for two times before driving far ahead, pulling to the side of the road, then running into our path when we passed by.

We told them we wanted to get chai, and so they led us on a wild goose chase into town. They found a restaurant and then in the most disorganised fashion, tried to organise us all in. Bevan refused to leave the tuk because our possessions were all still loaded up. Bev and I went in, and then we sat there, while they didn’t engage or talk with us, we just sat there, for 10 minutes in a busy café. Eventually, we got sick of this charade and got up to leave, they finally realised that the lack of communication probably was shooting them in the face, and brought us the chai.

Then, through disjointed Hindi and English we nutted out the basic details of our story. We still don’t think that they’ll get it right.

The Rickshaw Run is in its final few days as we prepare to get to Kochi after some final bits of sightseeing, all going well.

But, day after day we make it to the hotel ragged but alive, hungry but thankful that this is a holiday and not our way of life. 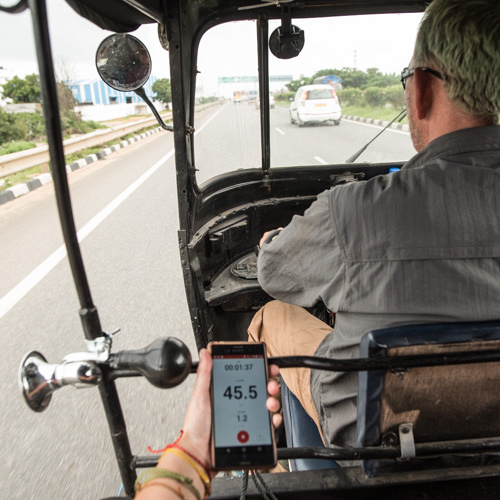 When the speedo breaks, technology has your back! 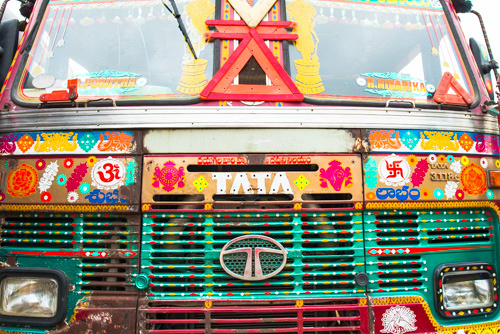 Trucks have such intricate designs... here's the front of one 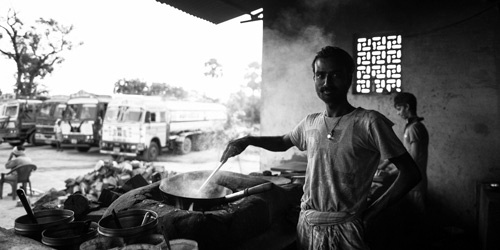 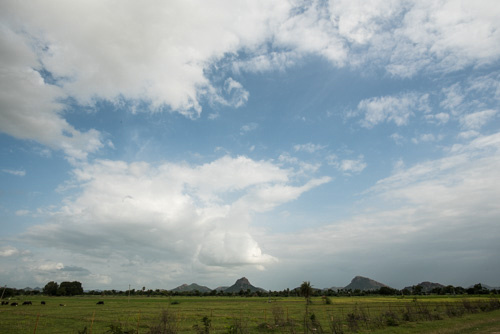 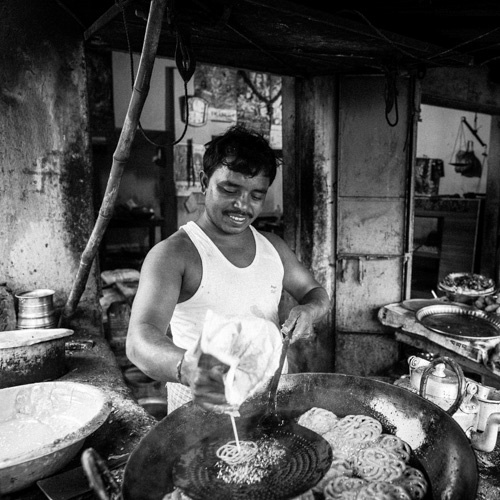 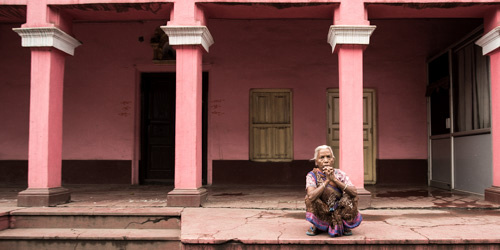 Old lady outside a shop / on her street 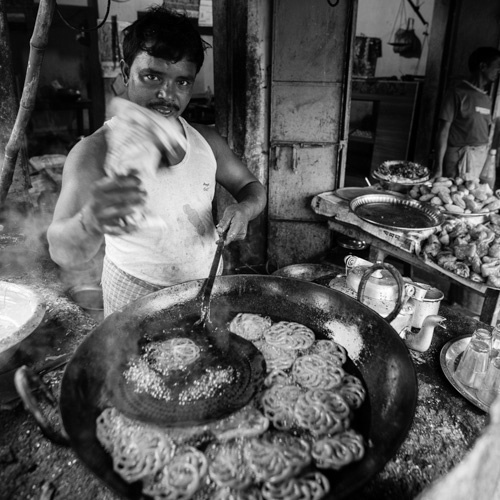 Got blessed by a guru. The gold spot is now gone, but Im not sure he brought us luck? 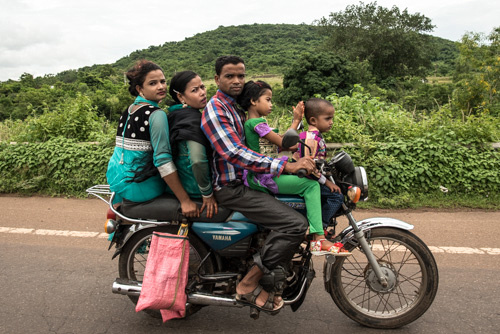 A whole family on a bike 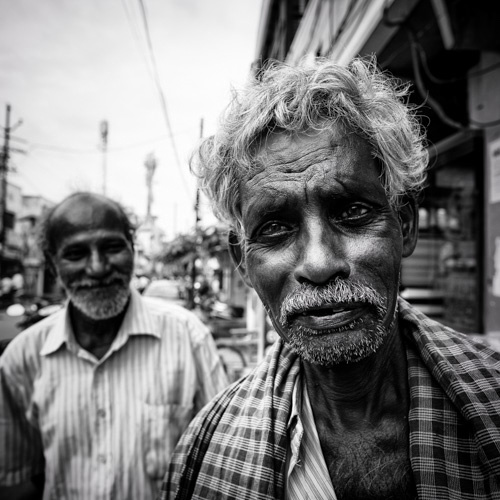 Old man I photographed in Chatrapur 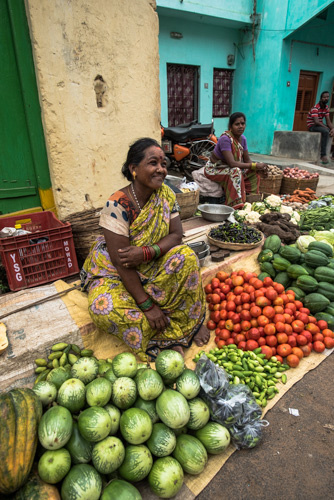 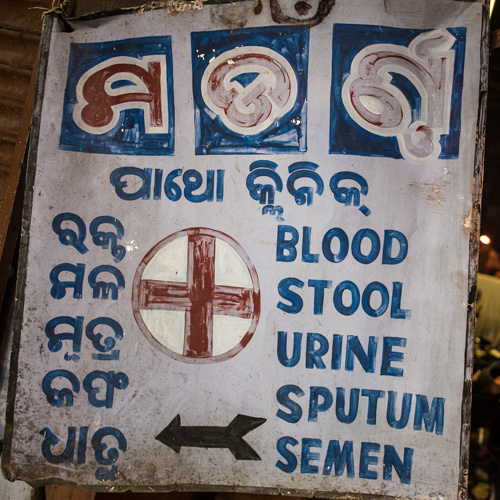 This one is for my pathologist mum... I thought she would get a kick out of how old fashioned it is!