After seeing what seemed like endless paddocks of powdery, ashen-dirt stained fields, crossing the border to Argentina was not as we had imagined in our minds-eye. Vast expanses of nothing but fences, the odd sprouted mountain, derelict buildings and the odd sign were the highlights of more than five hours of cruising. It began to make us wonder if there really was this oasis of hiking and exploration, our immediate surroundings were convincing us we were crazy.

We were surrounded in so much nothing that if we had of broken down we wouldn’t know how to describe the location. No GPS in our possession, we were going on instinct, rough, misguided… hopeful. The odd sighting of the Spanish-looking-guanaco-llama-like creature picked at the grey-green pubic hairs holding earth together,  pausing and staring up at us with accusation, “what the hell are you doing here, what the hell am I doing here?!

This all started because we got lost on the simplest of intersections. Devoid of helpful or any signs, we began the blind guessing of direction, only through some raw connect of broken English screwed with Argentinian Spanish, a lot of hand waving and map pointing at a gas stop I’d never make at home, the perky X-Trail arrived in El Chalten, Argentina a little before dusk. Relief swept over the crew as we spotted the other car from our troupe, parked at La Cerveceria - a culturally appropriate place for quenching dry mouths and filling empty gullets.

Brews and ales, pizza, pasta, dessert and cheer, the very next day would sign in the start of some more serious hiking. Cheeks were warmed, spirits lifted and hopes elated as the wonderful hostess brought us round after round, ‘til the better of us were deciding to hit the hay, and the rest so rightly followed. Sunrise was the beginning of a new and frosty day. 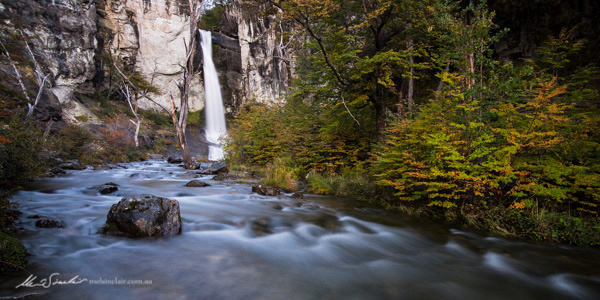 Frozen puddles, stiff grass and that wonderful feeling of being able to see your own breath greeted us as we trod the distance to the waterfall, the rushing water echoed through the leafy canyon somewhere beyond our path. The sunrise teased us by peeking its rays through the taller trees, giving a sense of urgency and panic. A few shots into the shoot, frustration set in and we changed locations, screaming off to the road into town, to witness it cradled among the mountains; the knifes’ edge of the Andes.

We stopped to take the best group photo ever!

Breakfast. Packing. Shopping. More Breakfast. More Packing and we were off. We knew we were saying goodbye to our technology, our showers and our worldly comforts once more.

The introduction to the hike was short and steep, a stark reminder of the heights we were to climb soon. That said, once inside the park, the paths were winding and rocky, but it wasn’t long until we could spy the mystical Tors In the background, inviting us into their park and into their world. Ducking and weaving around the little rivers, surging through tunnels of tall shrub trees, it was so blissful to turn a corner and end up in a new part of the scenery, like acts in a play. We all knew we were settling in for a long walk, our packs heavy but our spirits were full and elated in the morning sun. 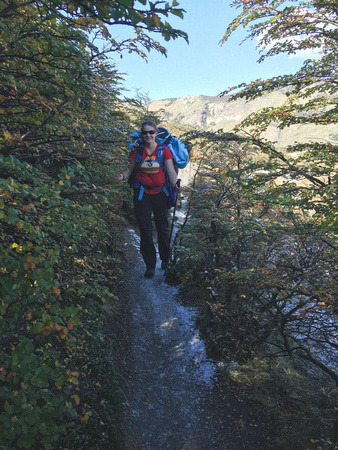 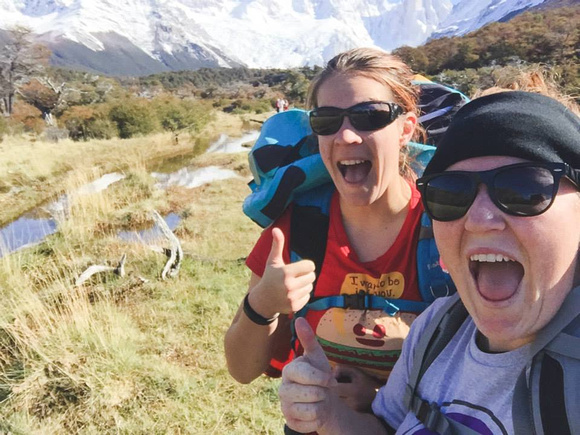 Only a few had an idea of how long we really were going to be walking for. The rest, like myself, just thought to begin and when we finish, that’s when we finish. The path to begin with was of mixed terrain; it all was really. More trees, more mixed forest and more dicey pathways, sections of ice, mud pits and slippery rocks . I could hear my bag dragging against the fine bushes as we passed through tunnels of vegetation, my jacket beginning a leaf collection by the time I stopped to rest.  We moved through scenery like that of an ikea serving suggestion. Filtered light, tall, open forests, mossy and damp from dew and rainfall, rocky rapid cascades next to a pastel aqua stream, paths often not so obvious, but that didn’t matter, we could feel the direction. Low branches, high ones, stepovers. The path was so varied of terrain that it was fun to cross. Log-tied bridges, but never losing sight of the tors that marked the map of where we were going. 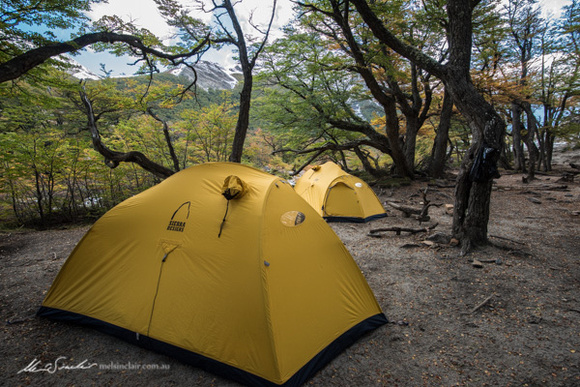 De 'Agostini camp ground, it was around these parts, so very convenient to the locations we wanted to see. Truly a stunning part of the world.

By late afternoon on our arrival, light had softened amongst the forest, tents were up and bags were lightened up, it was time to explore. For the boys, that meant strapping on harnesses and getting as close to the glacier as they could. Storming over the hills dressed like arctic ninjas, chancing upon another tour group. Shock and awkward glances, nods exchanged.

I however, had dissipated from the group, I was exploring the forests that we had passed during our hike. I was intrigued, I had to investigate. I found a spot to stop and take in the scenery, in the shade, in the warmth and caught up with my dear diary. This was a habit I had only begun to get into at the end of the tour, motion sickness from writing while in a car had stalled most of my plans to be active with writing, but nonetheless, this was my moment. 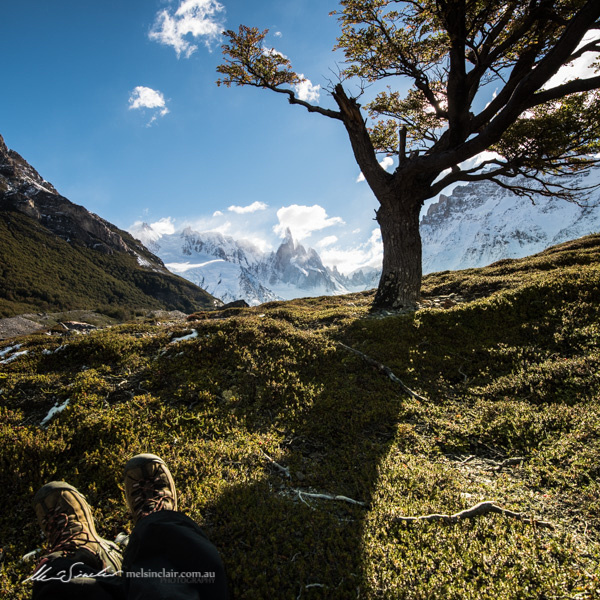 I followed my instincts up hills, roughly through the short-statured trees. I had to walk bent over or at a crawl most of the time, I was taller than the trees, and SURELY in my bright blue jacket I figured someone would see me, but no. Hiding in plain sight, I was loving it. Keen to shoot something different from everyone else the next morning, I was out and hunting for something other than the lagoon, this autumn color was beautiful and needed to be showcased. 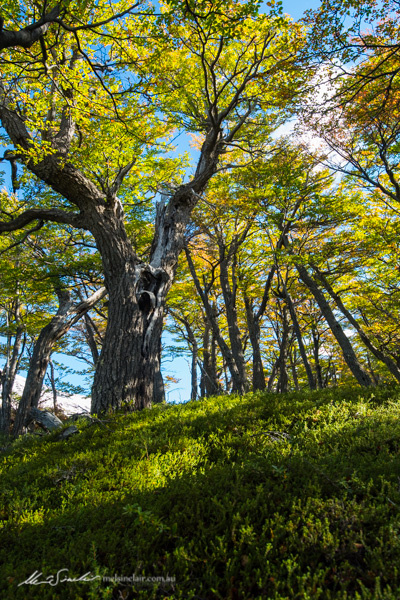 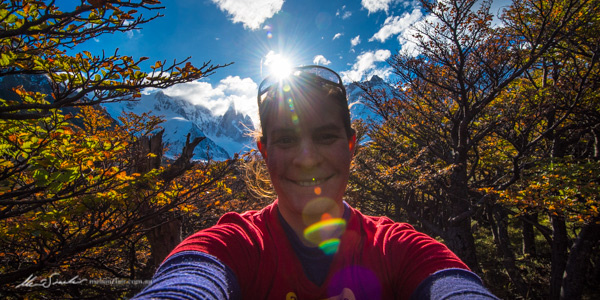 While the clouds parted for sunset, I continued to poke around what scenery there was. But I know I had found my perch. Returning to camp I had the most delicious Back Country Shepherds’ Pie, mash and meat and vegetables. I am sure it tasted better because I was in the middle of nowhere and it made this simple, sometimes bland meal, taste amazing.

Nourished, I climbed into my tent and set myself up for the morning. Writing some more and settling in for some decent sleep before it got too cold once more.