^ Just a few (not all) of the immigration stamps!

Several days had passed since we first entered Torres Del Paine National park, and now it was with rather sad but excited faces that we were leaving, crossing the border to Argentina and hopping into a whole new park for the next few days.

The Torres had been our first real taste of Patagonia; suffice to say we were hooked on the scenery and the intense colours at every single location. Bundles of memories had been made and now it was time to see what it was like on the other side of the fence.

Our last day amongst Torres Del Paine, waking up at Las Torres we saw foxes over breakfast, running around in the pre-dawn light as rain softly fell from the darkened skies. It was the kind of day where you just wanted to watch it pass. Climbing into the cars while it was still wet, we were headed for the border, to cross into Argentina. Arriving at the border gate, parking in front of a striped and extended boom gate, followed by gravel road, it was as you would walk up to an airport border security desk, silent, behaved… ordinary.

Passports stamped, processed out of Chile into… somewhere else. Yes we were going to Argentina, but you don’t get that stamp until you’re in Argentina, or in this case the little dilapidated house on the side of the road that ventures into Argentina. Either way that next stamp was to wait. Processed through, the boys began dealing with the cars that we were crossing in, while the rest of us went and waited patiently. After much to- and fro, the boys came back to the cars with sullen faces.

We had been denied entry!

It had something to do with the cars, but regardless, we couldn’t camp at the border, so it was back to Puerto Natales while Tim awaited the missing documents to be sent to us, by bus. Nevertheless, it was a night in the hotel that was needed to again recharge batteries and regroup before heading off again the next day for attempt #2. 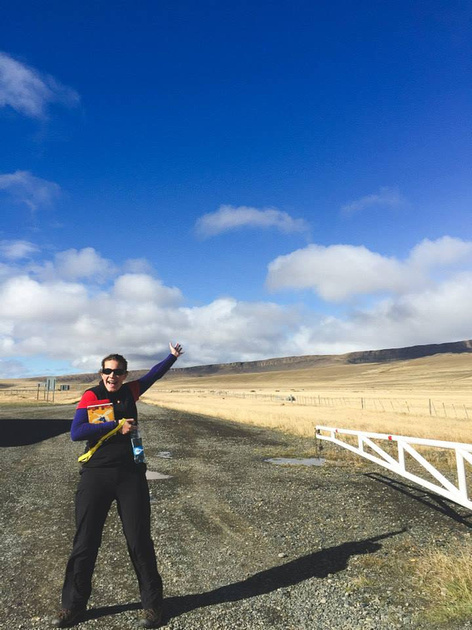 ^ On the line : Me at the Border! Photo: Clair Norton/ Clair Julia Photography

Fast forward to the next morning, and here we were again at the Border of Chile, Nomansland and Argentina. Straight out of a comedy skit we bailed from the cars, passports and documents in hand, ready for round two. Walking purposely into the building intending on coming out triumphant, forms were filled, lines were formed and passports were stamped. By now we were beginning to amass an impressive number of entry/exit stamps from Chile, a story to be told from just the passports themselves. The rest of us stood at the back of the room nervously watching whether the documentation for the cars would be accepted, and, then as it were, we were allowed to go on our way. Surprised and relieved, we were finally getting to El Chalten by nightfall.

The gates of the border were opened and we drove our cars through victoriously, after all that we had been through to get in, we weren’t looking back. It was only a short drive through nomansland, before reaching the hut of the Argentinan passport control. A dimly lit room with poor signage, two guards at kitchen tables and a big pile of manual-entry paperwork beside them. No computers, not even a lightbulb on, I’m surprised they even saw the page. Clearly the law was lax around these parts.

Some more stamps to add to the collection and into a snowy, cold southern Argentina we went. We were headed for the town of El Chalten, sitting below the majestic spines of Parque Nacional Los Glaciares, or Fitz Roy. We had made it. The miserable grey and the emptiness of the landscape made it feel rather "soviet", there really was nothing except power lines and white-bathed hills.

To celebrate, it was time for beers, pizza and pasta and the most amazing apple pie. It would be a few days on dehydrated food from here on out. The next day would herald the beginning of the adventure into the park.