^ The Bar was at this luscious place, also the start of the hike up! Source: Las Torres Hotel

By this point in time of the trip, we had passed the half-way mark and were ready to embark on the greatest ascent of them all. The journey from Las Torres to Base Torres, via El Chileno.

There’s days that are sent to you with the intention of challenging you, and there’s sometimes days that break you. Today, for the most unexpected reason, broke me. I’m not proud of it, but it happened and there’s no point hiding from it.

My phone screen broke, so bad that it wouldn’t operate anymore.

I was without my translator, my pictures from home, music to keep me psyched, a camera to take happy snaps and a notepad when paper would get wet. I was sadder for the fact that I wouldn’t be able to record my journey through snaps from this point forward, as I knew that taking the pack off my back to get my camera out was just so impractical.

I had to commit so many facets of the trip to memory from here on out, I’m actually beginning to imagine that I took photos where I didn’t actually. Call it a missed opportunity, but this perhaps where we should all be. Rich in hindsight yes, but going those last days without a phone made me realise my dependence on it. It’s not about the function of the phone, or the connection of the internet, it’s about how much of our lives we’ve put into the device to manage; it was sobering. 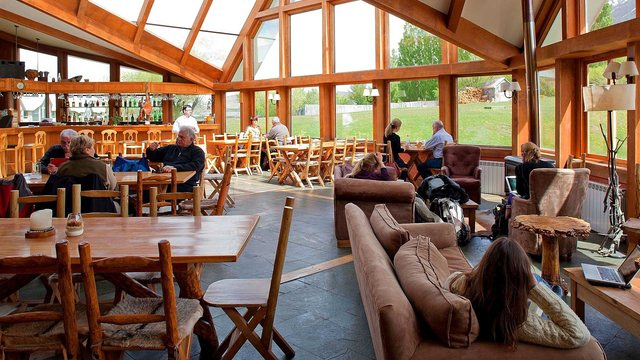 But onwards we went, after a refueling stop for a pizza lunch and some wine to wash it down with. The day was crystalline clear, a few clouds hung about, creating the perfect backdrop for the plush green grass beyond the glass atrium. Once the bellies were full, the moods were lifted, we stopped by the small little sales hut for a bottle of Pisco (kind of like herbal gin) stuffed it into our overflowing packs and hiked onwards and upwards. It was a walk that we knew would be tough, we knew it was going to be a bit of work. Walking the long flat before the first short up, I was determined to get my game face on, if only to prove to myself that it was only a hill, and I was going to get up it!

The track was worn from hikers’ past, the deep rutting’s and alternative paths worn into the grass and beyond to dirt. The paths twist and turn around rocks, trees and make their way up beyond view and into the valley. It’s getting cloudy now and as I walk I’m noticing how much cooler it feels. I stop to take a lungful of Ventolin and it begins to lightly spit, tiny droplets of water fall from the sky and I’m just hoping it doesn’t get heavier.

Hopes fall on deaf ears, the heavens open and give us a good ol’ Patagonian drenching while we’re climbing the hardest parts of the track. In what felt like a matter of minutes, I went from dry and confident, to pretty sure that even my Goretex was soaked to the bone (or so it felt). Rain drove into our faces, testing our willingness to be there. For what seemed like a short walk, it was most definitely made way too uncomfortable by the driving rain. Streams were forming and rolling down the hill ahead of me, the water now milky with the pale brown soil going along for the ride. It was as if a chocolate milk truck had let its load go, tumbling down past my now sodden everything.

Even though the pack was digging into my shoulders, it was all about the mind, not the body. One had to imagine that it was as light as a feather, and didn’t matter. I was getting up that hill, and it had to be with the pack. I trained for this. I was ready, I was doing it, I was going to!

I began to realise that if all my essentials for life are in my backpack, what the hell else was I worrying about. Why did all the other stuff matter so. It’s all here on my back, camera, food, sleeping gear and tent, life goes on, you can do it.

By the time I had reached El Chileno, I did not see anyone else, and even questioned whether I was going in the right direction, crossing the log bridge leading to the refugio several times before realizing there only was one track.

Once up the track, I saw Rob under an awning, out of the rain for just a second. Piled-to-near-overflowing were others’ backpacks, and it took a second for me to register that the refugio was open, it was warm, out of the wet and toasty warm. My heart melted a little and I sought temporary refuge inside. As a condition of entry we all had to remove the fish tanks from our feet, and squealch inside with sopping socks.

Warm and lively, the refugio was swollen to capacity with people taking a break from the rain which continued to drive hard. People hugging mugs, holding beers and eating chips were scattered around the room, the warm aromas making it temporarily feel like home and become intoxicating in the mind as compared to the cold, woody surrounds outside offering nothing of the sort. The parts of this beautiful building that I remember the most is the large, open communal area, facing the onwards wilderness with large panelled windows, high wooden ceilings and foggy glass, caused by the internal wood-fired heater and the moisture outside condensing. A big pile of pre-made pizzas and cream or caramel buns sat stacked on a silver platter each, the smells making the woody, sweet but salty air all the more enjoyable. Soft music was played from reception and it was a space that did not feel hostile in the slightest.

One by one as our party stumbled past, we all flowed in, each wondering what to do next as the rain didn’t really let up. Sopping wet and spirits hampered by the wet night ahead, we checked into the final beds of the refugio, all fitting neatly into a room with enough beds for the group. 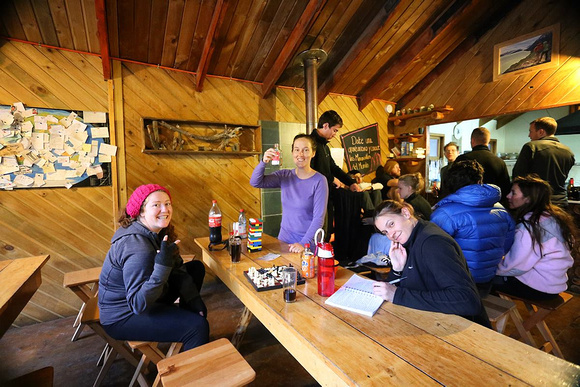 That night we reluctantly bunker down and take over a drying room for our clothes. What looked like a room before we got there was now just a maze of drying lines, strung up with hopes and dreams of putting on a semi-dri garment in the morning. We had a dinner of fish and mash, prepared by the host and his mother who were soon to be closing up the refugio for the wintertime. The meal was homely and tasty, supplemented by some drinks and a hilariously fun game of Jenga.

As the night drew to a close and we retreated to our bunks, plugging in earplugs and listening to the rain on the roof, we were never more satisfied to be falling asleep in the warm, dry confines.