It seemed like only a little while ago that I was unable to contain my excitement for this trip, that the routine of the day to day was getting in the way of where I truly once again wanted to be: Iceland. I would daydream in idle moments what I would do back at certain locations, how I would shoot them, looking at images from photographers who both live here and visit frequently.

Now, with around ten days left in this beautiful country, time is running out for me to see what I wanted to, take artful images and enjoy the being here, not just letting it pass. Time is also running out for the volcano to erupt (I'd be lying if I said I didn't want it to happen), see the many destinations in ideal light and soak up what remains of my holiday.

^Snow-drifted roads from our trek inland a few days ago

It's been hard to sit still these last few days, but indeed that is all we have been able to do. So far, minus maybe one or two dawns, we've had nothing but cloud, wind and often sideways rain. It's beginning to get so old that I'm wondering if this just serves as a great big finger from above.

“...The best artist can portray the shitty in really amazing ways...”

I know these are often well-intentioned, but they often serve to make me feel worse that I'm somehow not tougher or made of Goretex in order to supposedly come away with an award winning shot. There's just something about having done it heaps of times already to know that the results will just come out as a waste of an actuation: dull, lacking contrast or be spotted with rain.

It's often really hard for someone who hasn't been to Iceland, to understand how severe and changeable the actions of a very moody mother nature can be. It's not just about getting out and sucking it up... it's not about getting out there and trying for anything just to say I did it. There's rain, then there's one-hundred-thousand-angry-vikings-inside-a-jet-engine kind of rain where it just goes everywhere in the flash of a second, usually almost always magnetized to the front element of the lens. It gets up your nose, in your ears, down the back of your neck, but five minutes later its sunshine (if you're lucky). 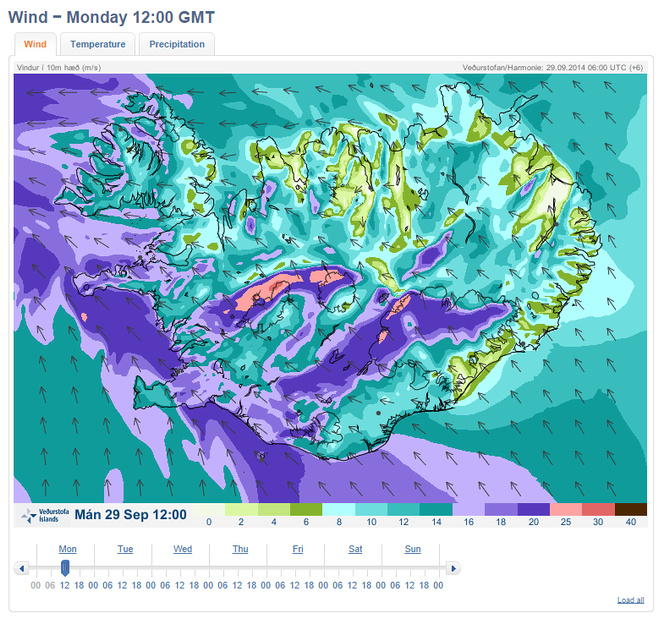 ^ See those oranges, purples and dark teals? These mean that you had better pack up your tents, pack away anything precious and head inside with a copy of a really long book- basically forget about doing anything else for the rest of the day. Heading out in this means certain misery, even if you like paragliding or kite flying.

Today we had gale-forced winds. Not just a breeze or two, the warning specifically stated “20m per second wind” 20 METRES PER SECOND. And holy crap they were right on that. If I had bought along a onesie with wings I'd have been in Reykjavik in an hour or three. The prospect of driving into the Westfjords for six hours, navigating the fjords on gravel with minimal visibility and no guard rails with perilous canyons next to the roads, sounded about as fun as swallowing a drawer full of forks. In these conditions the distance did not appeal, so to lick our wounds we changed our action plan somewhat and are now doing a loop-the-loop to see the last few places on our hit lists. The weather can make or break you. Sigh.

Last night we caught the Aurora over the Hvitserker arch, known colloquially as 'The Troll'. We had a window of about two hours according to the forecast, which turned out to be pretty much correct. Clouds were yet again a starring feature, but it turns out that yelling and cheering the Aurora, much like your home football team, makes it perform better. Who'd have thought? Either way it passed the time well. 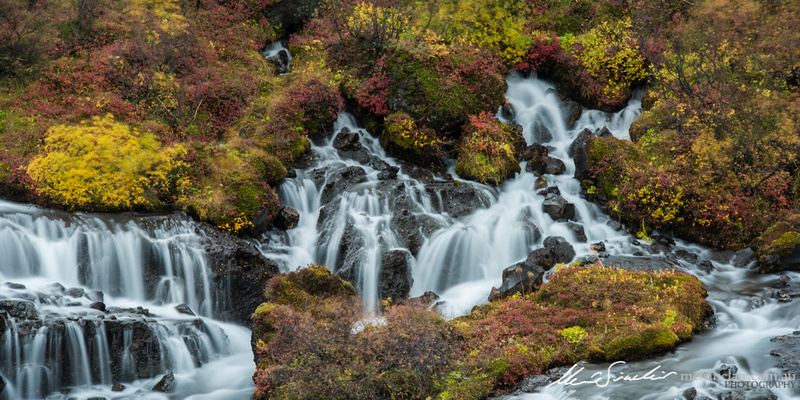 The saving face of the day, in the brief window between horizontal rain and angry-jet-engine-viking winds, we managed to find some time to check out Hraunfossar, a beautiful waterfall that seeps out between volcanic rock and into a blue stream. Now given the rains, this stream, yet again, wasn't blue. This is one of the places that stiffed us last time (2012) due to bad weather. While it may have done it again, it's on the list for “if we've got time to go back to-”.

Now, as this girl didn't get a shower last night... See you all later!