A Sprinkle Of Magic

As always, these are not the final edits, I will revise them on a bigger, better and colour-trusted screen when I get home next weekend!

There are many adjectives that come to mind when I think of the spectacular scenery I had this morning on Jokulsarlon beach, but none more so than a recurring word that I'm finding I'm using a lot: Speechless. Back in 2012 this was the title of the blog post when I first visited the amazingly popular location, the colours, the coolness in the Arctic air, the icebergs and the beach... Once again I feel this is the most fitting word.

Let me fill you in a little on how we came to be back at Jokulsarlon, having only been on the other side of the country merely a day ago, at the Snaefellsnes penninsula. The last-minute journey, in short, was due to the weather. We had endured three days of gale-forced winds, cloud and nothing but differing intensities of rain, holed up in a beautiful and eclectic (but not what we are here to see) hostel called The Freezer, in a town called Rif. We had performed a squiggle around the northern parts, intending to head to the Westfjords earlier in the week. The tumultuous weather conditions had blown us away from taking this route, as there would have been in excess of six to seven hours of navigating the gravel roads of the fjords, in winds deemed by their strength in metres per second. As much as we were busting to see the wonders of the north again, we had to seriously weigh up whether it was even worth the travel. While in Snaefellsnes, the throat infection that had been calling wolf intermittently throughout my time here decided to make its triumphant, temperature inducing return, much to my annoyance and hopelessness. A day spent in bed followed by a second feeling less than fantastic, I finally beat it after the sage advice from a dear friend and diving into my large bag of drugs, brought specifically “just in case.”

Looking at the forecast around the country on Thursday night, it was clearly evident that the Westfjords would have to be forgotten this time, served up with a big “screw you” was snow, sleet and wind, with special emphasis on the RAIN. Being so remote, there is hardly any refuge from the elements up there, the roads are so narrow that they tumble away to certain death leaving no space for error. It'd have been cold, miserable camping or sleeping in the car. What would we yield as results? It was terribly uncertain. The forecast for the south of the country, contrarily, was looking to be amazing. A clear day on Friday, a promising sunrise on Saturday. A quick deliberation about skipping the Westfjords sealed its fate; there would be no return. There would be no safe place if we got stuck in bad conditions, the shots we might get were unknown. We made the choice to travel 500km from Snaefellsnes to Jokulsarlon on Friday. 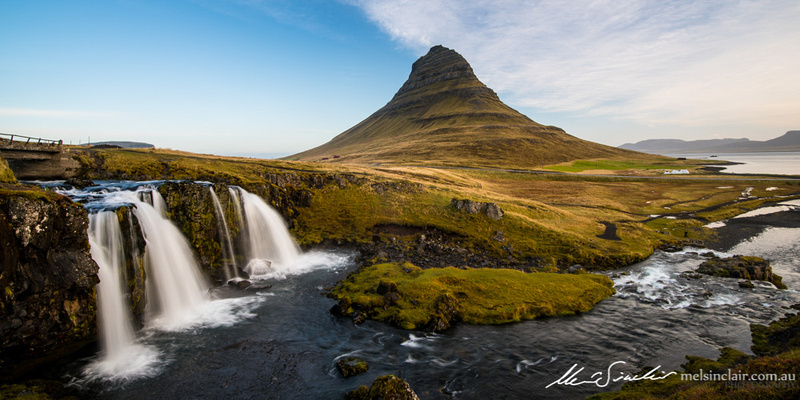 ^Kirkjufellsfoss and Kirkjufell. A boring shot, not my best ;)

Leaving ourselves just enough time to quickly swing past Kirkjufellsfoss for a quick sunrise spray proved interesting. Throughout the few days that we were there, we had dropped in from time to time, almost always having some level of tourist or inconsiderate photographer exerting their selfish need to hog the spaces or walk into our frames, and this day was no different. A bus load of French photographers who were less than friendly had pulled up, all in all, I'd guess about ten of them. It was an in and out job, I just couldn't comprehend it.

The day on the road was like every other, except we had sunshine, snow dusted mountains and different things to look at, having taken a route that avoided Reykjavik city. We had aimed to be at Jokulsarlon for sunset, the light was looking favourable and we were so eager to finally get some colour in the sky after weeks of grey. 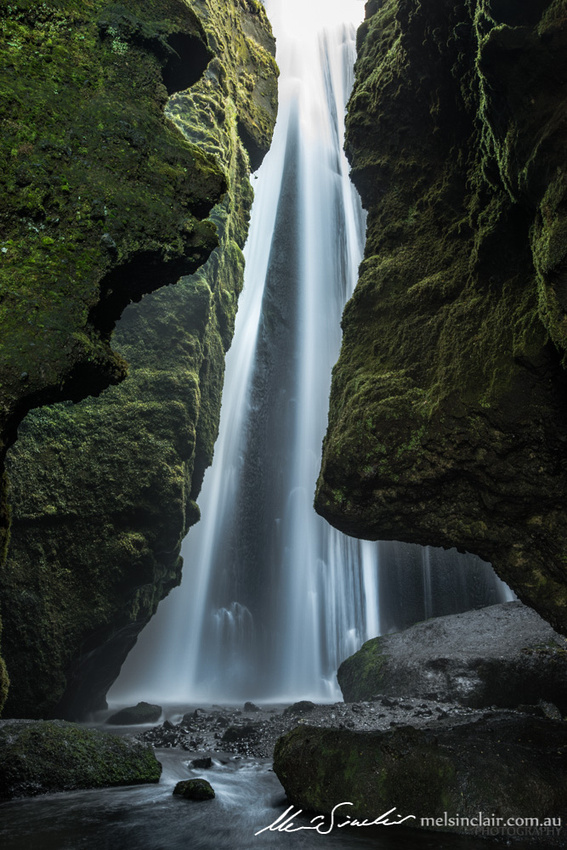 Unable to resist the sun's worldly-charms, in need of a leg stretch and well, just because, we made another stop at a waterfall that had taken our hearts some weeks' ago. Trying to quickly duck in and grab those shots turned into a little bit longer of a detour than expected, so it was time to put the pedal to the metal, travel no faster than the regulated 90km per hour, and get to Jokulsarlon. We were cutting it fine, arriving lakeside just on sunset. A bitter, frigid wind wafting off the glacier before us reminded us of the impending winter, its many breaths cutting through our wind shells, fleece, gloves and socks, essentially making us feel like we had just skinny dipped in our birthday suits. Toes and fingers, noses and cheeks were wind blasted, the short stop of no longer than twenty minutes made it feel much longer, as I shivered while waiting for exposures to finish. The wind was too strong, tripods shaking, bodies shaking and fading light signalled the white flag was flung, and off to trusty hostel Vagnasstidir we went. 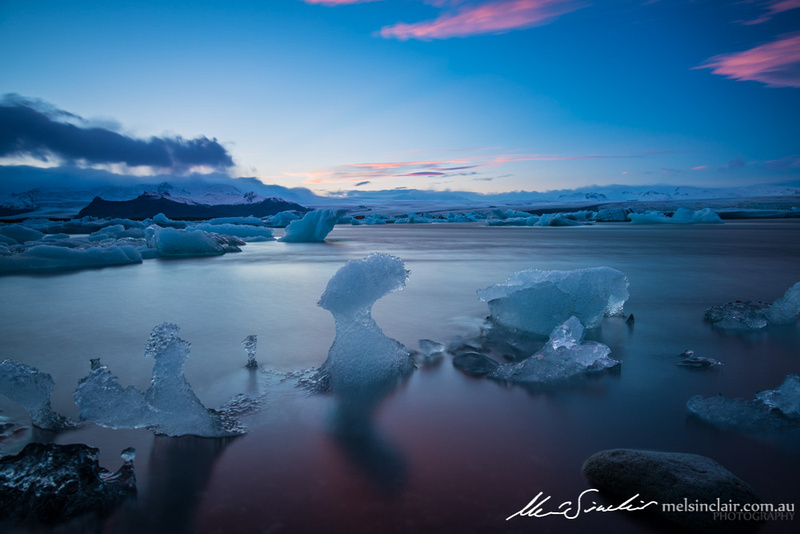 ^ A failed attempt at sunset... wind shaking tripod too much....

Alarms were set for 5am, batteries charged and cameras prepared for our last attempt at sunrise at Jokulsarlon for this trip. The forecast was for some light cloud, there was a potential sleet forecast in the hours leading up to sunrise. It was promising that we'd have some great cloud. Promises, promises.... promises from the forecasts had been the basis of everything we have done so far, so with the same level of optimism went to bed, hoping for a sunrise of colour, one to remember.

Packing up in the early morning to leave the hostel, into the car with a hot tea and down the road to Jokulsarlon. Cold and dark, all we could see was thick cloud. Not five minutes down the road into our twenty minute drive, it began snowing. Closer to the lagoon, through the feint blue light it was clear that the snow and sleet that had fallen overnight had not gone away. Fields of what was yellow, pale straw was now heavily coated in pure white.

Pulling up at Jokusarlon Beach, the numerous bergs were visible from the road, the wind the day before having pushed all the smaller chunks out to the coast. The difference this time was the entire scene was dusted with white, wonderful snow, beautifully contrasted against the stark black sand. 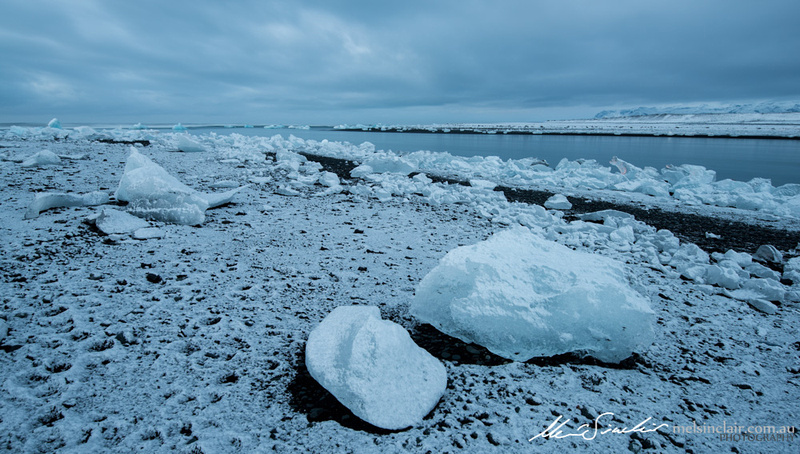 The first lights of morning projecting a deep-blue cast over the powerdery scene, clear ice with a sprinkling of magic. A giant feeling of happiness and excitement rose within me, grinning from ear to ear I ran back to the car, grabbed the gear and disappeared into my fantasy land. There was so much to see. Shadows from the storm were straight back sand, big clusters and thinner layers, white ice, rolled in black sand with white snow, it was a black and white heaven, I didn't know where to turn, where to focus, where to shoot. I was the first one on the beach this morning the first footprints, the first one to discover the many different pieces of ice. I felt like all my white Christmases had come at once, this was a heaven-sent gift just for me, I was sure of it. 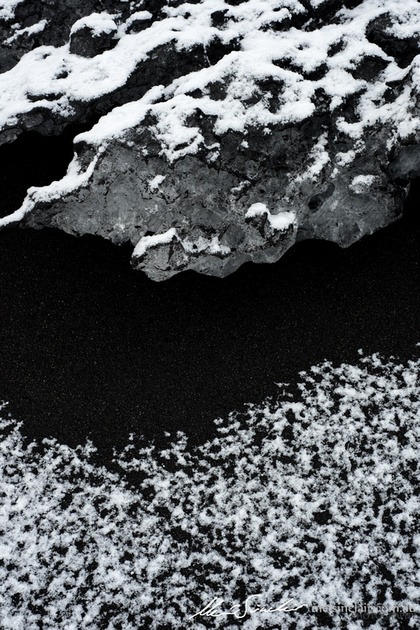 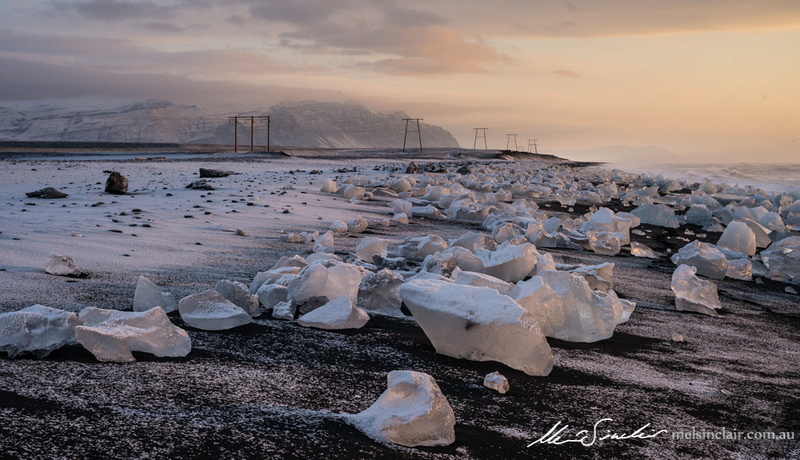 There was only a small inkling of the morning that would be, a tiny break in the clouds. At the time I wasn't bothered, there was enough subject matter, shapes, forms, colours tones and textures to keep me occupied for hours. For the next two and a half hours, I ran between bergs, exposing, running from large waves and repeating. Eventually my cheekiness caught up with me and my boots got soaked from water, the camera as always surviving the ordeal. My feet may have been soaking in Arctic water for the last hour, but inside there was an intense fire burning. As the sun rose and the colours got more intense, I could do nothing but smile and cheer. I was just so happy to be seeing what I could see the camera capturing. I eventually caught up with Josh on the beach when I started to come down to earth more, both of us incredulous at the scene that was unfolding.

Something, somewhere had taken pity on us for the bad run of weather we'd had and was giving us the lottery division 1.