I hadn't seen much point in blogging the days while I was still in Reykjavik, I mean how interesting can I be when describing shopping?

Yesterday was our first day in the “wilderness” of Iceland. This is really a little misleading, as there isn't many things out to get you here, probably just the cold and under-preparedness. You risk more falling into a stream and not drying in time for a cold night than you do getting attacked by the wildlife. Wildlife, for the record, is probably sheep or horses. Unless they're the killer sheep, then you're in trouble... 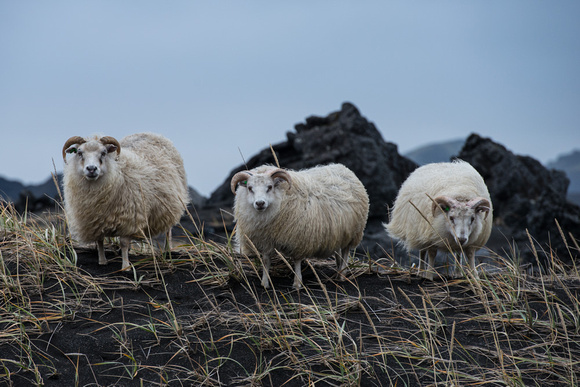 ^If you look hard enough, they could have malicious intent?

We spent our first night at Landmannalaugar, the painted central highlands, characterised by towering volcanic peaks, in various natural shades that sometimes take a bit of a stretch of imagination to believe are real. Intense deep greens, yellows, reds, covered by iridescent green moss, it's really quite a sight to behold.

Before that though, we decided that it would be a good idea to rush through some of the tourist attractions in the area, taking in Geysir and Gullfoss in record time. These to us are not really photographic moments, as there was a bus of fossils touring at the same time we arrived. Thankfully it was a stunning day and a great shot was effortless.

Chasing the sunset light through Landmannalaugar was probably one of the highlights of the day – the light was incredibly gorgeous and eventually we had to stop ourselves from wasting any further time as it appeared that we would be setting up our tents in the dark if we didn't get our skates on. 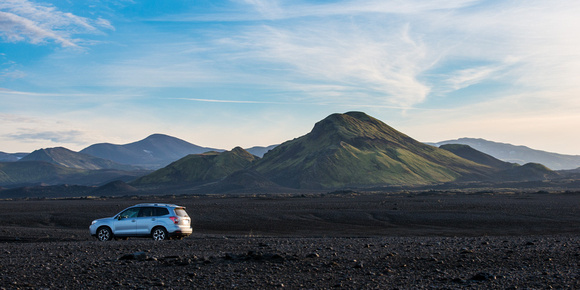 ^ Our rental Forrester with the gorgeous light around it. ( Haven't looked at those shots yet)

As it was, we got there just as the great light had faded, and set our tents up in the blue hour of night. Finding a dry patch was questionable, as we fumbled (or at least I did) to manage both the breeze and my tent pegs which wouldn't go in. Frozen fingers and tired after a long day darting across the countryside, it seemed totally perfect to soak in the hot spring also located at the camp ground. 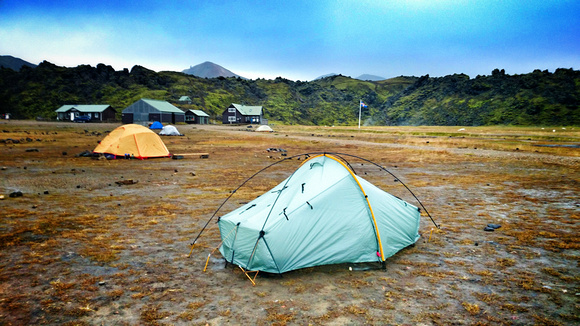 ^ My tent in the landscape... kidding... camp ground! (half packed up when I realised I should've taken a shot)

Iceland owes its amazing attractions to the geothermal activity well below the surface, the hot springs being one of that. As the clouds rolled in, shaking from cold, we changed from our warm hiking clothing into bathers, and made the short journey from the bathing pavilion to the spring. This was about a 40m boardwalk, mostly wet from previous people doing much the same dart from freezing cold into the steamy brook before us.

Bobbling about, a screw cap of red wine in one hand, staring up at the stars and watching the clouds roll in was probably the most relaxing I have felt in a long, long time. I could feel the warmth of the spring seeping through the rocks below, into the water and heating myself and the 6 or so others all thinking the same thing. Under the glow of night, it was just so incredible, silhouettes moving about like animals in the night. The water appeared stained by the natural minerals, much like that of a brown 70s drinking glass, and emanated puffs of steam as the wind graced over us, reminding us that we were best to stay where we were.

The sky of course, had other ideas. I spied the feintest glow on the horizon, it couldn't be, it was hundreds of kilometres away. But there it was, the reflected glow of Bardurbunga fissure eruption, nestled safely in the low cloud. A once in a lifetime opportunity of course, so loathingly and somewhat regrettably, I pulled myself out of the water and did the insane cold-air run from spring to shower. I'm glad I did, the shots I got are incredible. The aurora briefly joined the light dance of night, and wow, simply wow...! 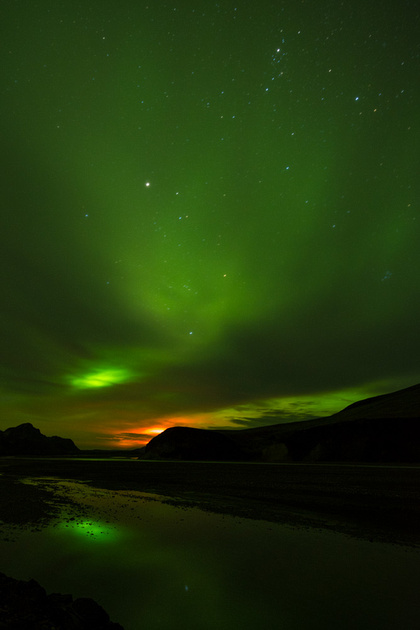 Waking up to rain, it was clear we weren't going to be able to get out into the higher hills to see the sights we wanted, so after all the necessaries of tent charades and eating were complete, it was back to the hot spring. Leaving around midday and heading back down to Vik for the next two nights was our priority.

We got side tracked by Selandsjfoss, a waterfall visible from many kilometres away. We knew of a less-popular waterfall, and went to check it out. It was just so beautiful, but so hard to get a shot without water droplets attacking the, well, everything. We left cold and saturated after taking those shots. 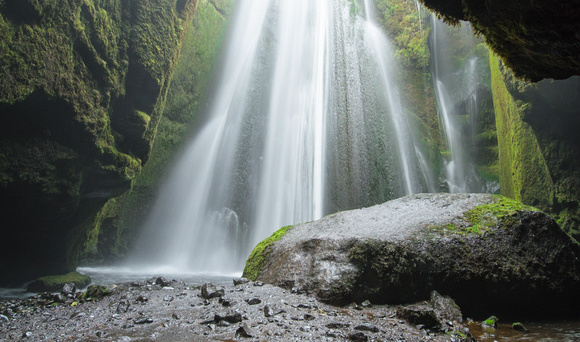 Over the next few days we're going to watch the weather and conquer some of the local waterfalls, pinnacles and peaks before moving onto Jokulsarlon then soon, into the North of the island, where the true adventure awaits.

In between the photographic dramas, we've been acquainting ourselves with Icelands' culinary wonders. I've had the famous Reykjavik hot dog... simply put, Australians have no idea how amazing this simply is here. There's about 4 sauces, one of them being Bearnaise, chopped onion, friend onion, some brown sauce and some mystery sauce that nobody will tell us what it is...

But its SOOOO GOOD!