A picture tells a thousand words…

Our job as photographers is to capture life's moments. This includes our happiness, sadness, highs, lows and best aspects of all that we do. From the joy of birth, to the amazement and wonder of watching newborns grow, to young and old families enjoying each others' company, laughing and discovering the world around them. Fast forward to school formals, engagements and weddings.... This is what we capture for our clients, it's pretty predictable and can become quite repetitive.

So where then do awards images sit? Usually quite awkwardly in the middle. An idea that the photographer has is granted permission by the client, and usually a short inclusion in a paid family shoot results in an image that can be used for awards. But only the truly spectacular images reap the Gold with Distinction awards - the 95+ out of 100...

How many images have you seen in your lifetime that truly speak a whole essays’ worth in simple terms? In a picture?! Ones that convey less popular emotions such as grief, loss, absence or frustration, or simply transport you somewhere else?!

Very few artists can show a world such strength in their narratives, but some of these artists, of whom I am proud to know through AIPP Queensland (Australian Institute of Professional Photography) have done just that; capturing a part of our worlds that we seldom discuss, gloss over or make-seem-normal.

In this blog, I am going to analyse and discuss the images and their impact, and how they have gone beyond “a picture of---“ and used strong visual language, through simple images to display craft and skill to create an image (or series of) into “this is the story of---“ to show you just how accessible an award-worthy image can be in terms of shoot and presentation.

The stories told are common, ones that we can all recognize, but strike us in the heart with their truthfulness and their sadness, and make intangible feelings a reality through photography. Call it what you want, I call it true artistry.

All three of these images have had an impact on the way I see awards, and the way that I strive to tell stories through my images. These three photographers are also Queensland residents, and people who I am honored to call my friends. They’ve all given me permission to share and discuss their images in this blog.

I still remember the first APPA that I attended, in 2015, and while the experience is a little blurry in my mind, I'll never forget seeing this print be judged.

In the AIPP Judging system, we look at live, real prints. Judging is conducted by having a large, plain wall, and a cut-out window containing a triangular turnstyle which holds prints. When a print is spun around on the turnstyle during judging, there’s a second or two where judges stop to look from afar, before jumping out of their seats to get within centimeters of the print, examining its parts, looking at technical aspects and reading its story.

As each judge read Colleen's print, one by one they were asking the panel chair to step off the print, visibly emotional. Stepping off is when a judge feels like they can't judge the print for whatever reason, we respect their decision to do so. Eventually none of the original panel was left and a panicked panel chair was scrambling to find judges. New judges stepped on and went up to see the print, they too were emotional but held it together.

From the Audience, a large crowd was gathering, and I could see the image on the audience screen. Wow. I too was speechless. The room was electric with eager eyes waiting for the score on this print, people were gathering behind the last row of seats and blocking the doorway out. I was watching the body language of each judge and each bystander like a game of football. Back and forth. It was seriously something else. 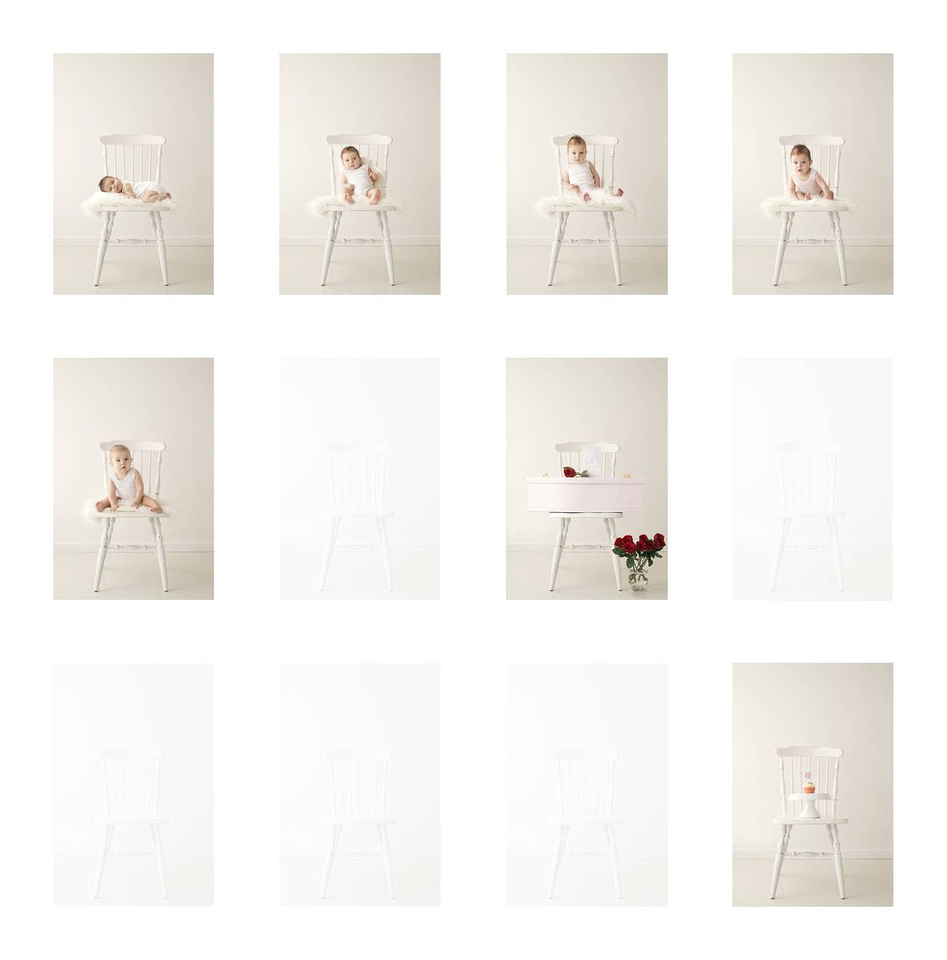 So what's the story?!

We are taken on a fast trip through a family's ups and downs , we feel like we're sharing the joy and warmth of the newborn, yet in blank white there's the uncertainty, we too are transported to immense loss. Twelve images of the first twelve months of this baby's life. One, two, three, four, the predictable growth of any new addition to the family. But then an empty, faded fifth, and sixth and seventh. At eight, a tiny coffin and oh gosh.. This poor baby didn't make it. More emptiness, a visual representation of great loss and mourning, and then on twelve, the first birthday cake. A point in time marked, but never lived.  I had never seen judges cry to that point, but a suggestion in the print has resonated with a personal experience and that's all it takes.

The tiny coffin was a clever fabrication that just helped sell the story. Macabre, but a story well told.

Examining the technical aspects, it's a relatively simple shoot. One set, one chair, a client obliging for the use of their images in this way, some flowers, a cake and a tiny coffin. Any one of these images on their own would not have scored as high as this did, and it was the implied narrative that drove this one home. Each image in a series like this needs to hold weight, it needs to be there for a reason, as important as the rest. That's a challenge with an image that uses several parts to form its whole. Each square was a moment (implied) too horrible or too hard to put into words.

Later, I’m told, the baby didn't actually die. Colleen was able to get the clients’ permission for such a story. I’m sure there’s a whole blog on convincing a client to work with the photographer for a conceptual shoot such as this one, but in both professionalism to get the permission and the visual aspects that made this image such a tear-jerker, this is what we strive for in creating excellent images. 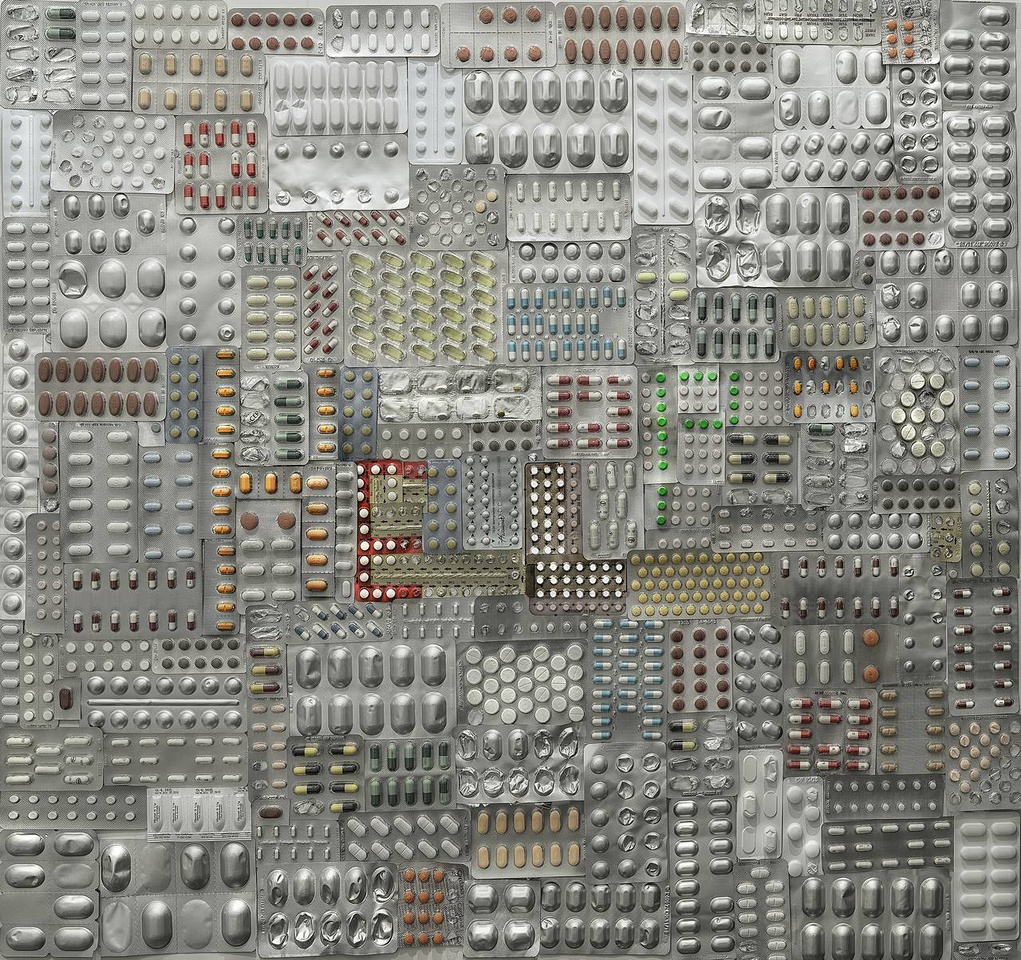 Stef’s image captures the desperation of those who are stuck in the clutches of needing a plethora of drugs to survive or recover from a (or a few) medical conditions, but unwillingly get caught in the middle. There are those who are stuck with the addiction to substances that were in legitimate prescriptions who now turn to harder drugs to feed that need, long after their scripts have expired. There are those who have a sense of self but only between doses wearing off…

This image was created for displaying the anger that the photographer felt for what Big Pharma has done to his friends and loved ones... 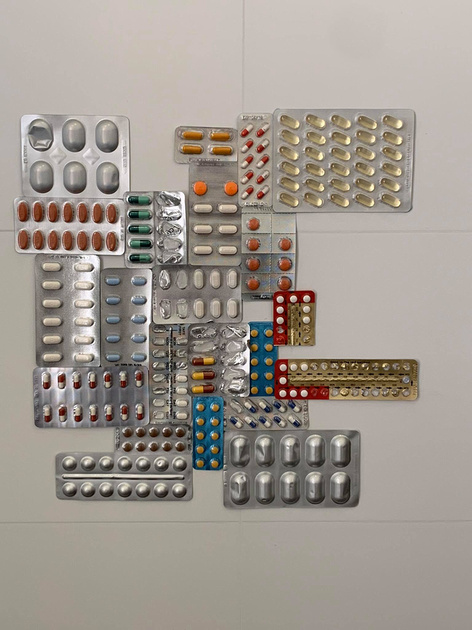 Stef told me that he stuck the sheets with blu-tack to the bathroom wall and assembled them then and there. No composition in photoshop required, just a single capture image and some light editing in post production. Stef also commented that he didn’t make the image specifically for the awards, rather it was an idea that he had floating around in his head for a few years that finally came to fruition when he had worked out how it was going to be made. Through his frustration with the big drug companies and their willingness to push drugs onto people, he has created an image that speaks to anyone who is angry with the world and how Big Pharma controls it.

The judges understood the image instantly and recognized the current social comment regarding prescription medications. As if it were a modern-day SOS scribbled in the sand, for a person awaiting rescue from a predicament they cannot escape.

Video from the judging. For Stef's image, browse to 50:26 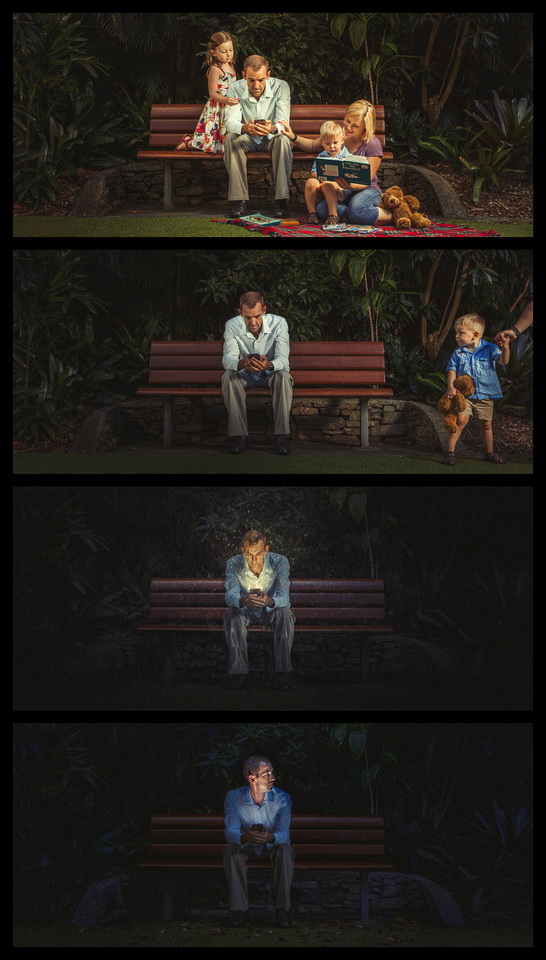 We call them Smartphones, but they’re sucking our lives away.

They’re taking our time away from the real things of value in our lives, and replacing it with useless junk, cat videos and endless emails and IMs to respond to at all hours. They were meant to help us, but have instead hindered us, stolen time away from those that deserve it the most; our loved ones.

This image, titled “Sleepless” has captured the essence of both the 'cool' and the 'curse' of our digital dependence, simply showing us what we’re missing out on by looking at a screen instead of our loved ones.

There’s four images, and it’s easy to see the repetition through this picture. A dad having a picnic with his family, except he spends the whole time on his phone, not interacting with anyone. The children are trying to play with him, to gain his attention, but eventually they leave, but he's still on his phone. He doesn’t notice. It rains. He doesn’t notice. And just once he’s drenched and its dark, he notices. But where have the people gone?!

To this date I haven’t witnessed what an emotional roller coaster that this image was. I had seen it previously in Colleen Harris’ image (mentioned above) but in recent times we had been lacking from this kind of emotional trip. Kris has made a name for himself with his vivid depictions of social commentaries, and this image is no different.

Does it make you examine your own social media habits more closely?

I’ll leave it to the video to demonstrate the judges impact to you:

So, in all of these images, has any spoken with you?

Have a good look at how these images are constructed, the simple ideas that led to their creation and the social commentaries that they illustrate. Simple images, complex ideas, moving narratives. The difficult part is that we have days, hours, weeks or months to construct these kinds of images, and a judge gets 30 seconds MAXIMUM to read it. Is your story able to be told in a picture in 30 seconds? That therein is the challenge.

When I think of an award-worthy image, they’re above.

Try not to look at a photograph as your end-of-line; there’s more to it than that. Consider each image in this blog against each other, how would you have interpreted them? Do you agree with the way the image was presented? Remember you can only judge the final product, not the bits of story around it.

In looking for images that strike the judges, you should always seek to tell a story of, instead of just taking a photograph of, however that may be~