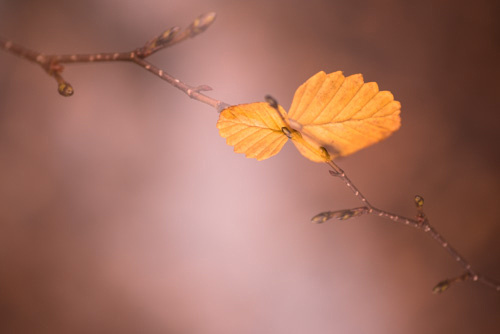 Focus on the Fagus was back on again this year, and after three years since I had been to the event at Cradle Mountain, I just had to go back. I took my mum with me this time, as she had never been to Cradle Mountain before. I knew that she would be welcomed into the group as a non-serious photographer, a hobbyist just to enjoy the walks and the company that often goes with that.

The idea of Focus on the Fagus is simple: We're a bunch of keen photographers from around Australia, all once joined by the website and art-sharing website "Redbubble". We descent on Cradle Mountain for a once-a-year week to witness The Turning of the Fagus (Northofagus Gunii), a small deciduous beech tree (aka Tanglefoot) and see it change from Green, to yellow, gold and red. If we're lucky and we've timed the week right, the fagus will present in a variety of illuminated shades of autumn. At the end of five exhaustive days of hiking and exploring Cradle Mountain- Lake St Clair National Park, we have a competition day on Friday. The idea is pretty simple - Submit two files at the end of the day, that best vision the Fagus. All photos submitted to the competition must have been taken on the Friday of the competition, from 12:01am to 4pm. The winner receives the Cow and Calf trophy, plus their name on a shiny plaque on the master trophy.... this is kindly sponsored by David Murphy and the Cow and Calf Gallery, Stanley, Tasmania.

I can't believe how fast the past week has gone, time just flies when you're busy hiking, taking photos and being up at all hours doing crazy hiking things. I took it relatively easy this time around, I was rather tired easily with having just had the flu shot (possibly not my smartest move prior to a week of hiking) but nevertheless, it's a holiday and it's not always about going flat out at every given moment.

Arriving in Tasmania late on Saturday 23rd, my mum and I stayed overnight in Deloraine before heading to Cradle on the Sunday, via Woolworths for the shopping required to keep us relatively in-budget for the next week. I think we bought way too much, but that's always the way when you go shopping hungry. On the night of our arrival, I chanced upon a tunnel of trees and made plans to go back the next day and shoot it properly.

Sunrise was cloudy, so the tunnel of trees was in muted tones, alas was alive with yellow leaves scattered along the bitumen. 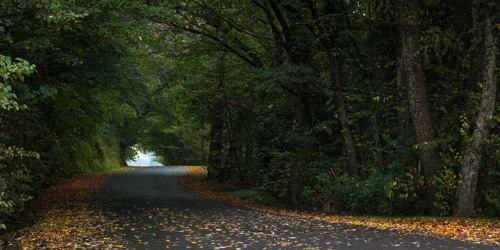 We got up to Cradle later than everyone else, who had already gone out on a hike to explore the foggy mountain. I took mum to see the famous boatshed and we had an easy afternoon adjusting to the cabin.

Cradle Mountain is a place that is very special. The walks aren't necessarily all that easy, but the smell of the fresh air an the ambience of the mountain is entrancing. The weather is ever-changing and it is hard sometimes to even get sunshine. The walks all showcase a different part of this amazing part of the world, and each year i come back, I'm always exploring something different.

Monday morning rolled around quickly, and, as it does, I decided that since it was a rainy day, that I'd explore some of the rainforest tracks near the Peppers Lodge that I hadn't really seen before. This of course was fateful, after getting several shots that I was happy with, it began raining. Although the rain wasn't as heavy as I thought it might have been, my camera gear got wet. This of course, was nothing new, but alas when I got back to the cabin to switch my gear around for an afternoon walk, the camera wasn't responding. I dried it off and made sure to clean the different buttons. It showed it was working after this, and so I repacked it into my bag for the climb up to Marions lookout wth Rob and Mark.

I'm pleased with the shots I got that morning, but I'm still really sad that it came with the temporary (I hope) demise of my camera. It still needs to be in Rice, but I don't have that facility at my disposal now. 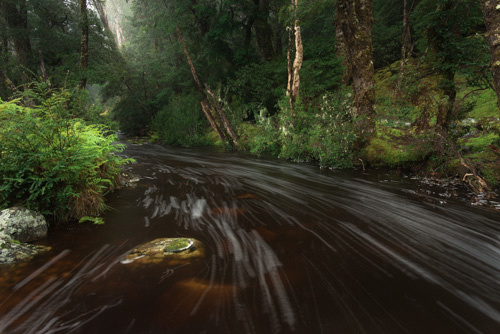 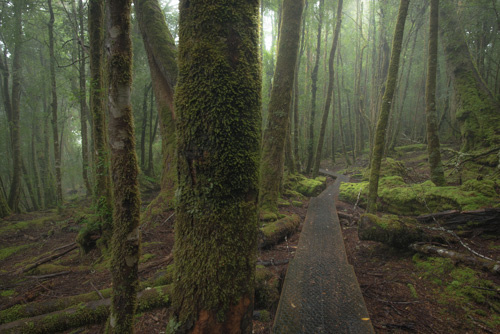 The creek that runs past the King Billy Forest Walk, and the aforementioned walk itself, the last shots I got with the D810 before it succumbed to a surprise water attack!

Anyone who has done the difficult hike up to Marions lookout via the "Fast" way (actually very difficult going up with 10kg of camera gear on the back) Steep but work the effort. I discovered on getting up to the top, that my camera was not OK, and as such, had to get only phone shots. It gave me some time to get to know my what my phone was capable of.

Tuesday I took mum into the Ballroom Forest for a look. The water was flowing well and it was a great moody day to be wandering around an Ancient Rainforest. I think I visit the Ballroom each time I visit Cradle. Again, there's something special about that place. 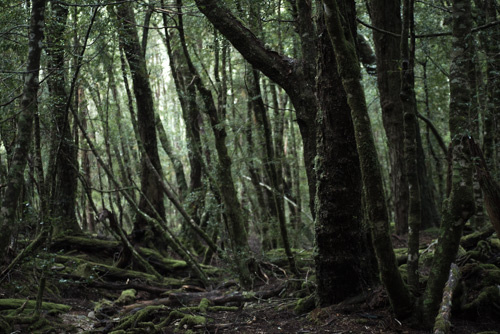 Wednesday was the "Wednesday Warriors" - basically a large group of us chose a difficult walk and made it ours. We did the Horse Track which goes around all of Dove and Crater Lakes, up to Marions and out past Weindorfers to Wonderland (our own name for a fagus patch). Wonderland was suprememly excellent. What made it even more special was the arrival of snow. It was so amazing to walk in snow that was settling as we were hiking through it. I simply had so much fun that day that I think the memory will last a while.

The photos truly tell how fun I thought it was: 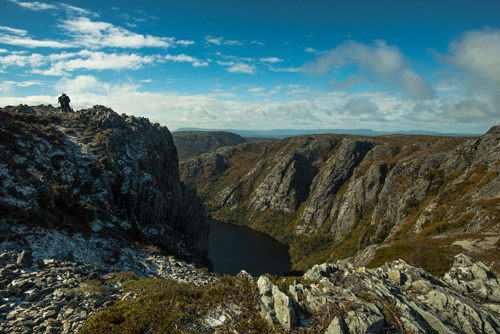 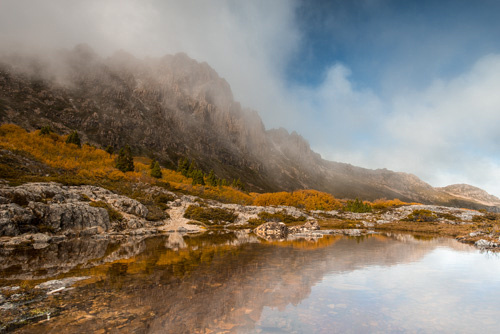 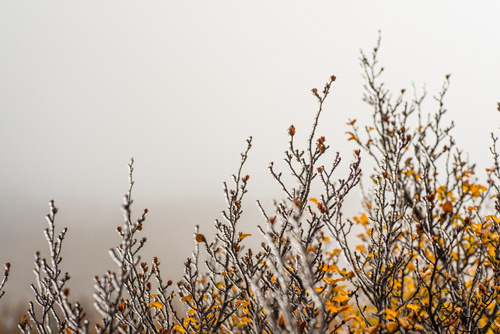 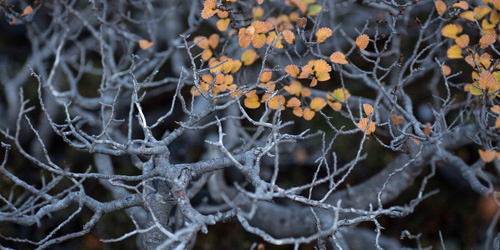 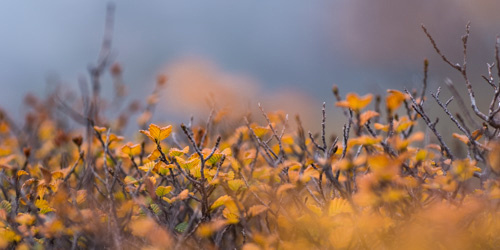 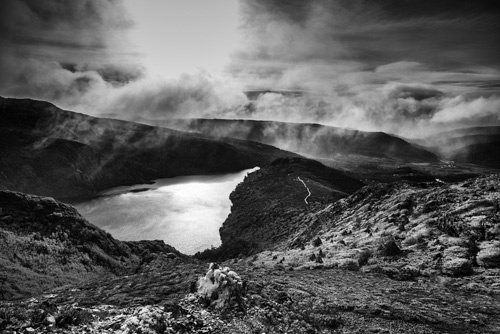 Looking over Crater Lake from Marions 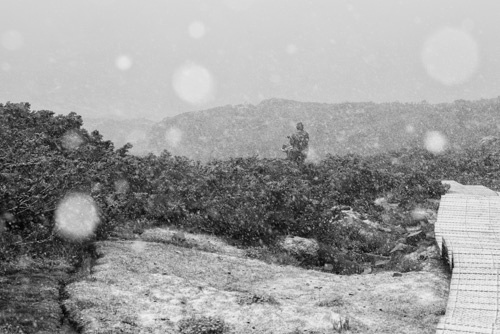 Snow on the return. 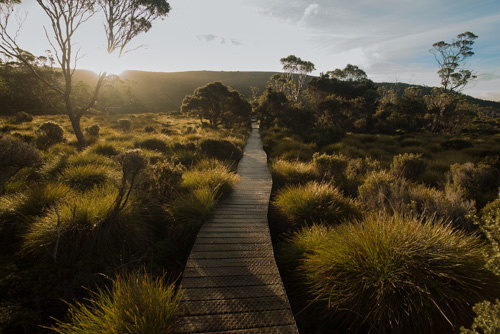 Thursday was another short day, I had been feeling like a cold was coming on, and after the extreme hike of the day before, I chose to take it easy, shooting sunrise and taking mum up to Crater Falls and Crater Lake. I shot a few frames here and there. 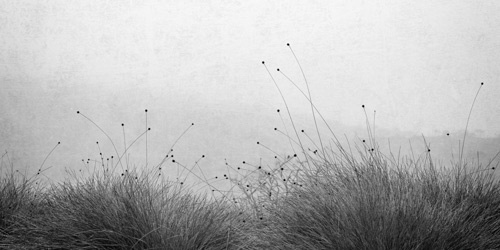 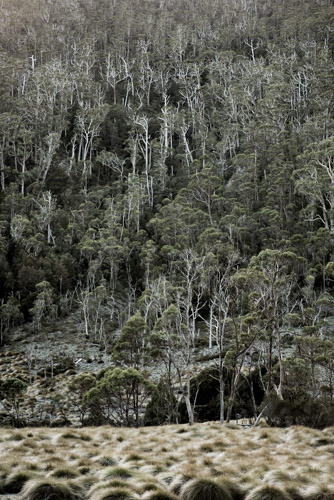 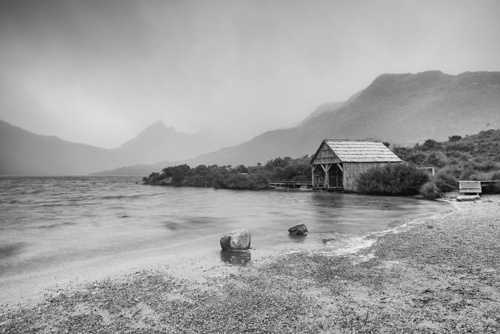 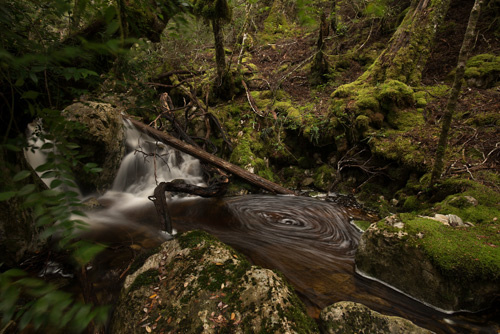 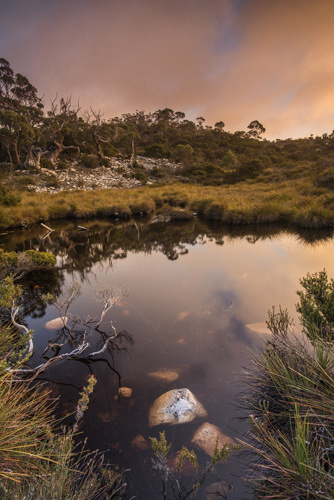 And finally, it was Friday:Competition day.

I had dreamt of the perfect shot and woke up to realise that it was both stupid and a big waste of time given that we onyl had one car, wherever I went, mum had to go too, and there was no way she would be able to climb the Marions steep track. So we went back to Houndslow Heath where I'd been several times before.  Since this track requires constantly watching your footing, most of my day was spent looking at my feet. As such, i noticed the reflections in the puddles, and came up with my Second placed (Runners up) image: 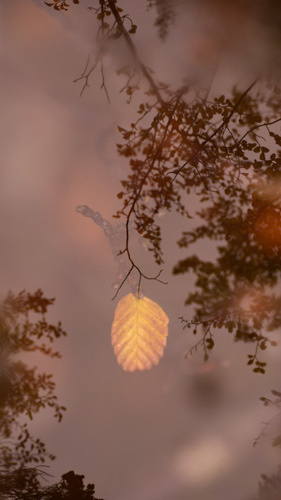 And that's about it! I haven't had much of a chance to do anything except driving today.

I promise I'll be able to get more blogs out now. Now that we've got WiFi pretty much everywhere we go, I'm hoping to be able to share more!