For someone who writes so often, I'm having trouble adequately expressing how amazed, honoured and surprised I am, to have done so well in this years AIPP APPA / Incite 2016.  Never in my wildest dreams did I imagine that I would be a Finalist for Creative Professional Photographer of the Year!

Every single year, professional photographers in Australia look forward (usually with mixed emotions between excited and trepidation) for the upcoming awards, so it's no secret that we put so much time, effort and emotional energy into getting images ready, ballgowns and livers ready for the meeting of so many great photographic minds.

My experience this year was somewhat different, being away for APPA meant that I was tuning into the Livestream from the other side of the world to watch my images come through the judging machine (ie, the wonderful process we all love; the debates, the discussions). Fighting tiredness and jetlag, I saw some images come through live, others, I had trusty, awesome spies in Kris and Wanda Anderson, keeping an eye on the progress of my images.

I know this is a lot of preamble before revealing my images to you; but it's because they're more than that. They're packets of emotions, I've not created a photographic body of work that meant so much to me before. This is a cooee back to my Fine Art days in university, some skills and some concepts which I have revived from those lessons nearly 10 years ago.

I loved Printmaking - linocut, woodcut, etching... I did every single Printmaking subject on offer at TAFE QLD. I had my own home inks, glass plate, rollers and press. There was an intimacy of creating an image by hand, with the assistance of several photographs, photocopies, and sketches. I got used to seeing things in stark black and whites. It became second nature. Fast forward several years, and sadly I no longer have the time for a printmaking studio, but that doesn't mean I can't think like I still have one. I love taking photos and making them the best they can be. The direction that I took for this portfolio was to challenge the idea of the traditional photographic print, with a romantic smile back to printmaking.

As for the technique? I don't want to ruin the mystery. The whole idea for this series was to challenge the traditional notions of a print. Even showing you a digital image is a bit of a troll... you'll never really get it until you see it, wrap your mind around it and then see it in a new light. You could argue that I should have just done the images in photoshop, but where's the fun in that?! 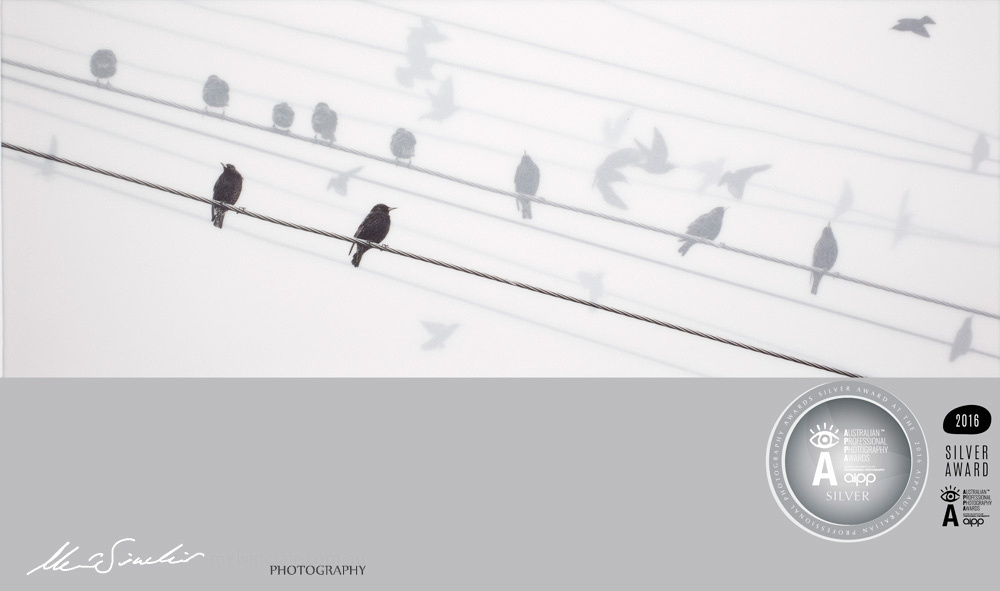 My Grandpa used to love sitting in the sun and watch the birds dance and sing. Often I never understood the joy of watching them, but as I get older I'm starting to appreciate the smaller things - getting away from technology and just watching them do their thing. I wanted to create an image that was an homage to my grandpa, but also had modern touches ie; powerlines. 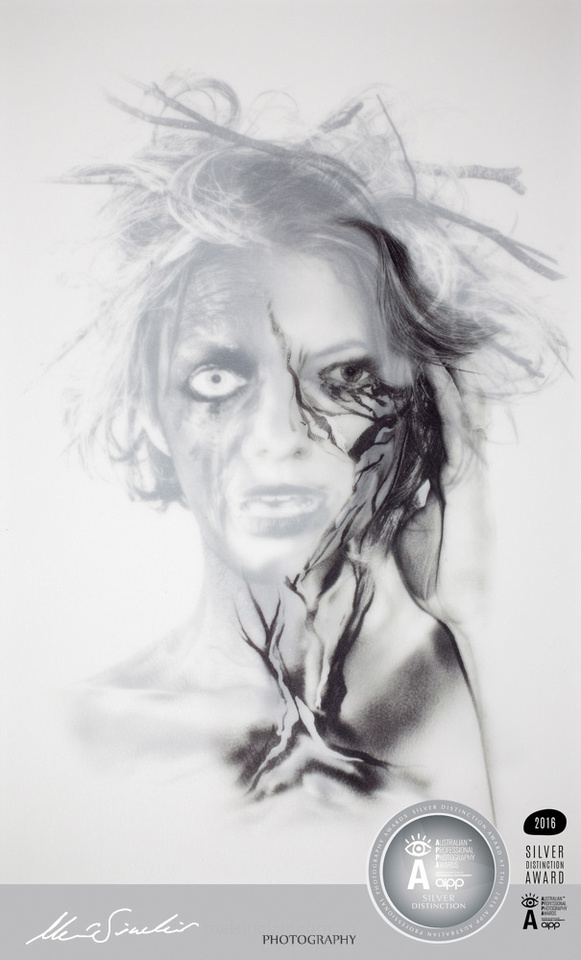 Breaking out, moving away, changing, transforming...

We all want to change something about ourselves but those who are trapped in a world of discomfort, depression or anxiety are stuck in a shell that sometimes becomes impossible to break free from. Your sense of self is diluted and defined by the things you don't understand, you feel isolated and alone. It's like a hand reaching up from below to strangle you. The idea that you're breaking, and trying to pull that apart from your identity is not as easy as it seems.

Big huge thanks for this image by the incredibly talent Kelli Misk-Alpine Designs MUA and my bestie Amber Smith for the human canvas! 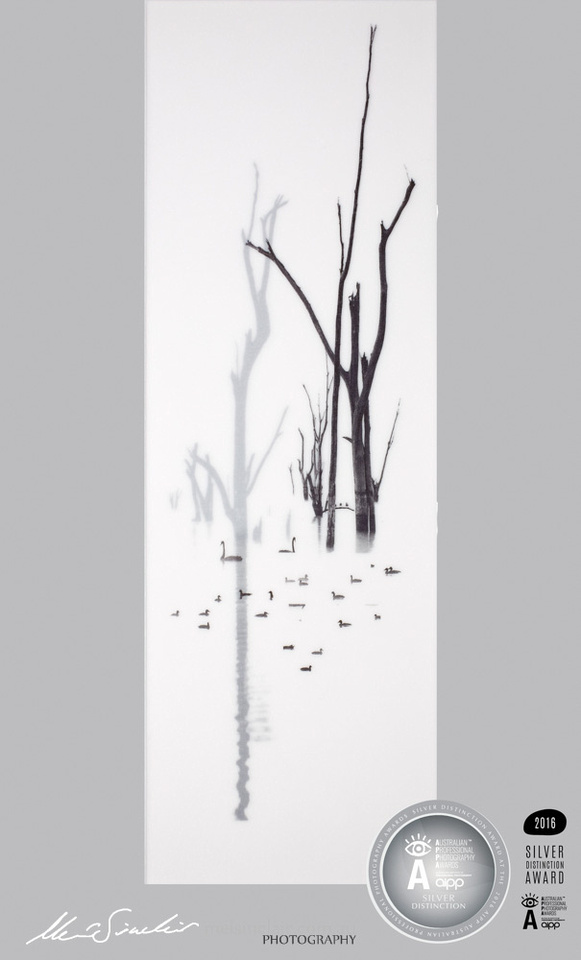 A hark to one of my favourite covers of the song "Lilac Wine" by The Cinematic Orchestra. Look up the video on youtube - and you'll see what I was seeing. This is my favourite spot in South East Queensland, Lake Moogerah.

In winter, the most beautiful fogs roll through at sunrise, it's so peaceful and I have photographed for hours. This image is a single capture, but extrapolated into different layers, pushing some back, some forward and really using the qualities of my paperstock to add to the mood in the image.

#4 "The One" Landscape - Gold Distinction Award 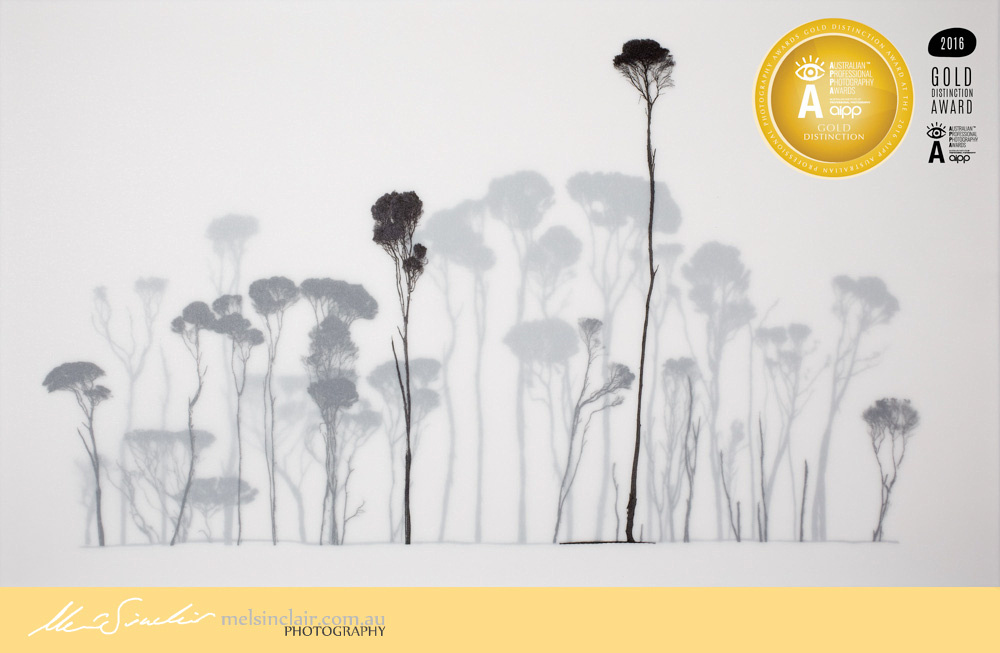 This is the one that started it all. I wanted to show the beauty and simplicity of trees in fog, without needing to have any fog present at shooting. It was about having the paper quality create that subject separation for me. If you saw this image at Qld State awards, you'd remember a slightly older version, but it was about developing it further.  I poured and entire weekend into re-shooting this location, getting the trees right and making sure I had different trees to use in my composition.

Never in my wildest dreams did I imagine that I'd get a Gold award for it at QLD States, and then a Gold Distinction at APPA.

It's reward for the amount of hours, reprints, sleepless nights and money spent on making this image the best representation in my minds' eye.

As for strategy? I am still working in this space so it was my gamble that paid off. It was a risky move no doubt: - it could have so easily backfired on me. It's all risk, gamble and reward.

But what is life without risk?

It's boring, it's really really boring.