They say that you make a few inspirational trips in your life, a few that stick with you. I think today was one of those days. We're in Cherrapunjee, up high in the mountains of India, among lush forests and heaving streams. It's the Monsoon season, so its hot, sticky and moist. As soon as we wake up there's a thin sheen of sweat on my brow, and it sometimes feels like someone has cranked 90% on the humidifier. But this is life.

I now have this amazing appreciation for the hard workers around India, the mothers, fathers, children and their way of life. How incredibly fit these people are, I was lost for words, several times… Large sacks of food, building materials and everything else carried in on foot. Up hills, across tensioned cable bridges, rain, hail or shine. 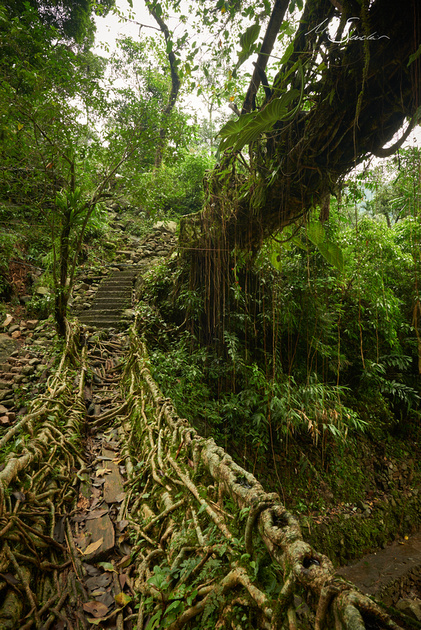 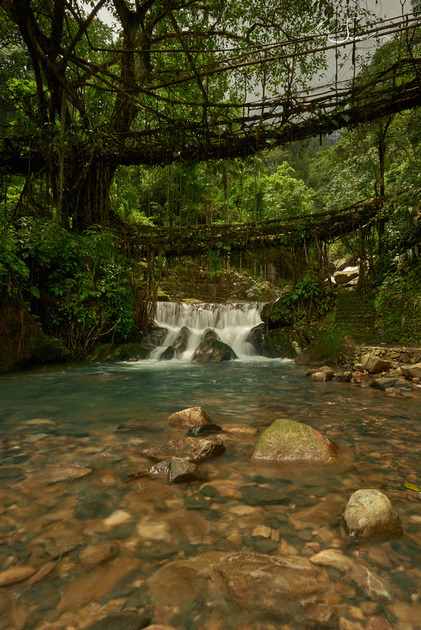 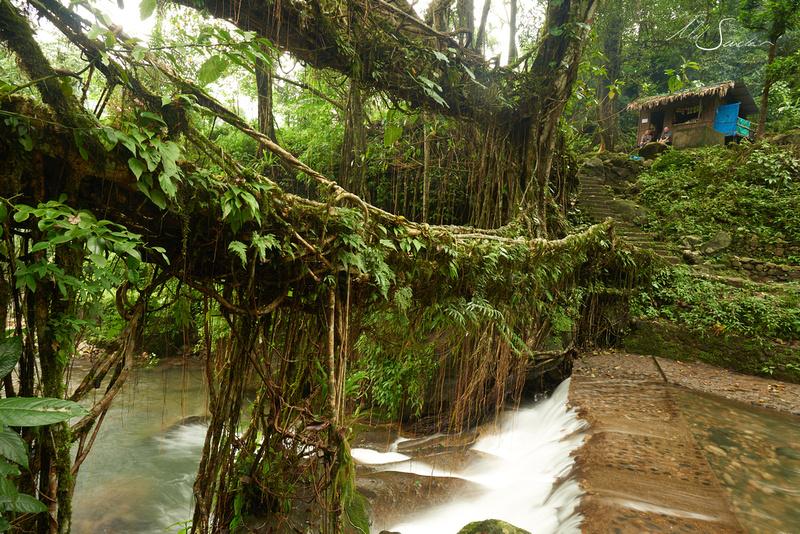 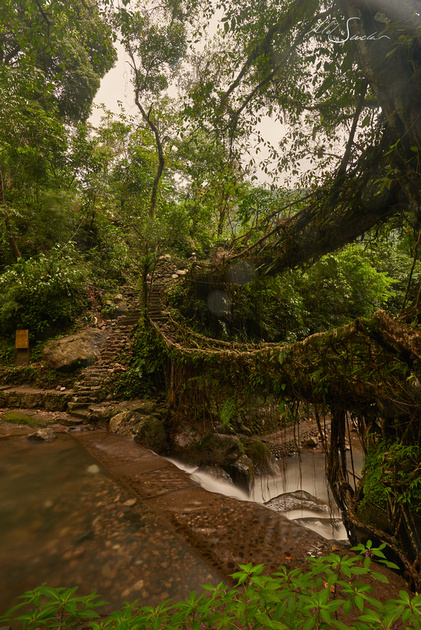 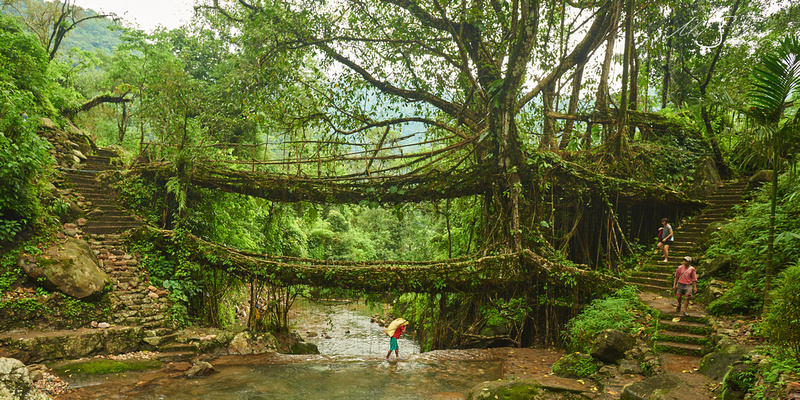 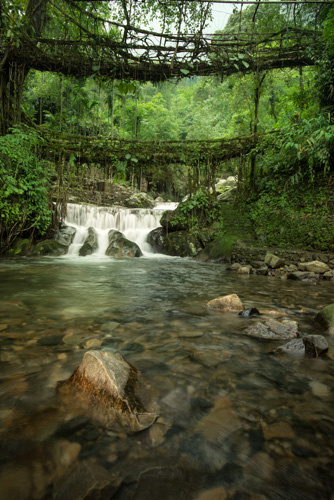 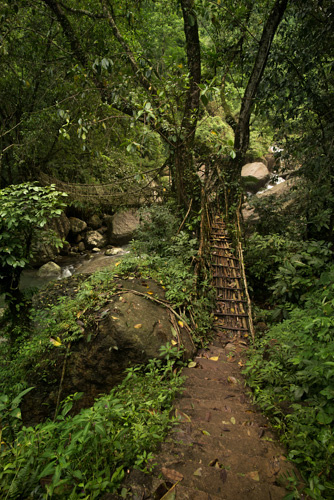 Not many people had heard of this wonderful part of the world, and not many photographers from Australia had photographed these living, breathing and bridges that are totally alive, thanks to the power of nature and a few ingenious folk of the region. Each of these bridges takes at least 15 years to bring to fruition, and most are over 50 years old to even support human weight. We watched the old man pull up the new dangling growths and entangle them into the existing part of the bridge. It was one of those moments where the penny dropped "well DUH of course that's how they're made!"

They’re so grand, you hear about them when you read about the region, but seeing them – and the only double-decker living root bridge in the world, nothing prepares you for how cool and how beautiful it is. Lush green and moist forest, surging pale-turquoise water rushes over the largest boulders I’ve ever seen. The smell of earth is intoxicating, the purity of oxygen takes you to a dizzying high. It’s all just overwhelming.

Walking across the bridges is a cooee back to childhood. It’s like the very best treehouse you ever had, times a million. There’s a playful innocence, an adventurous wonder and a bit of blind faith put into crossing these amazing bridges. They blend in so perfectly with their surroundings – after all, they’re just trees. 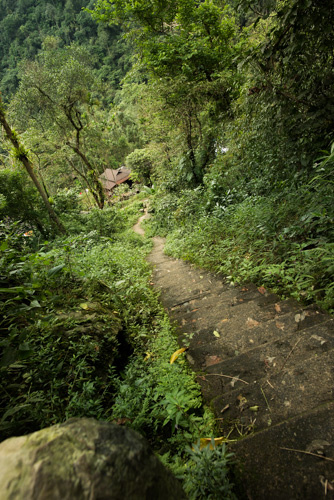 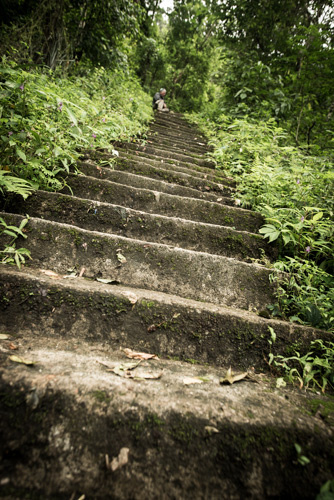 To get there though, that’s the tough part. You can take a car to the starting point of the walk, from there, it’s 1600 steps down to the junction where you choose which bridge you want to see. If you choose the Double-Decker Living Root Bridge – the only one of its kind in the world, you’re signing yourself up for easily another 1000 steps, a couple of suspension bridges and passing through some amazing little villages along the way. If you choose the long root bridge, you’re taking a bit of an easy way out, this one is pretty straightforward, but I think is one of the prettiest, besides the double.

These bridges are well worth the efforts, just make sure you have some sturdy legs for a 2-hour near vertical ascent of steps when you finish. I'm not joking, there were thousands of steps. What goes deep down into the valley has to come back up again.

But the payoff, whooa. Seriously epic.

There's even little homestays in the valley, so in theory you could stay a night or two, bathe in the fresh waters, explore the other bridges in the area and seriously soak it all up before returning to reality. We spent about an hour wandering around the base of the bridge, and most likely because I was photographing from every angle. And thats what you have to do, exhaust a location because you never know when you're going to come back. There's so much untouced beauty, no tourists- nada.

When the time came that I was done, and the Bevs were done, we began on our trip back up the hill. Monsoon made the hike back up the hill seriously strenuous. Add an extra 10kg of camera gear and the stairs were absolute torture. 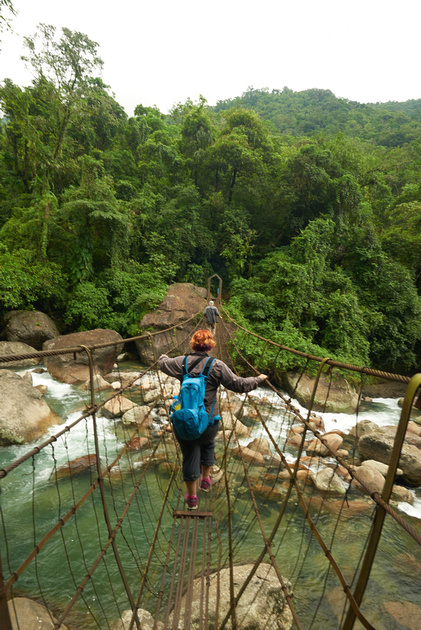 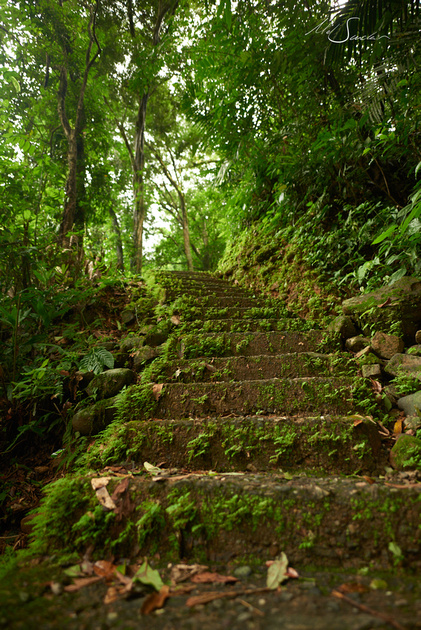 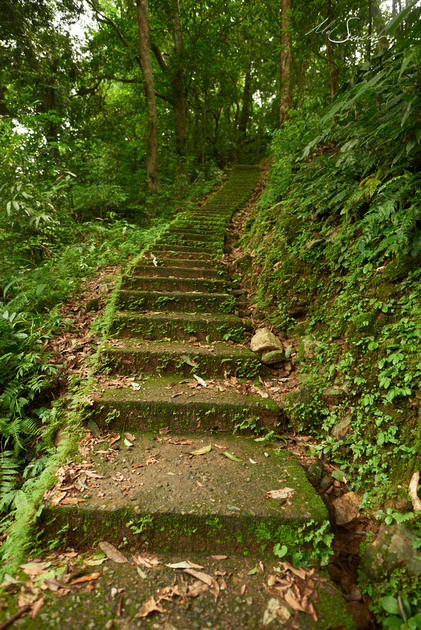 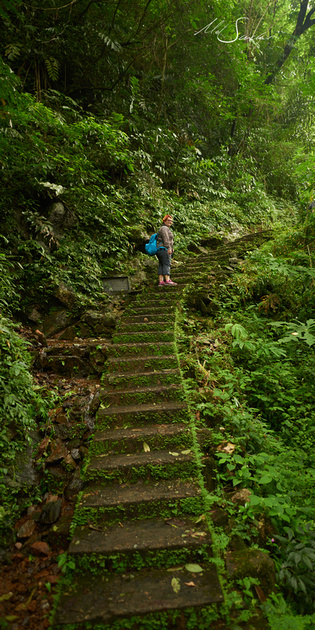 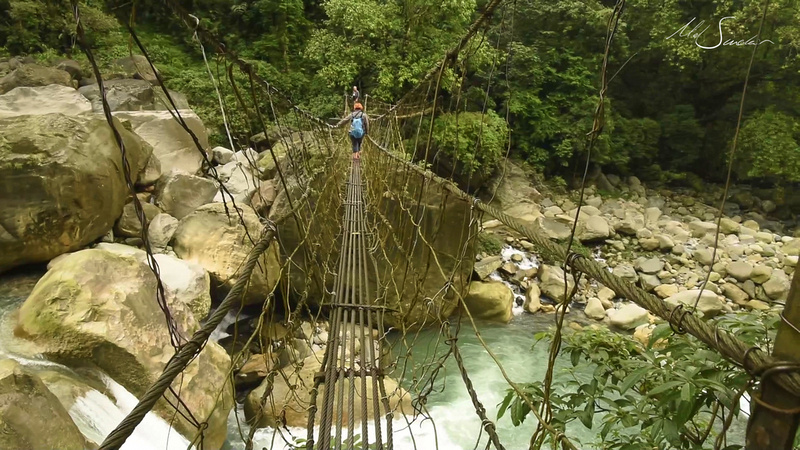 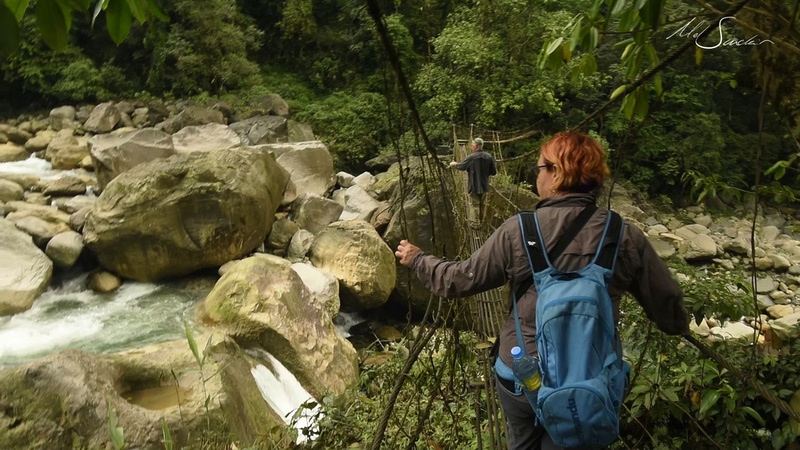 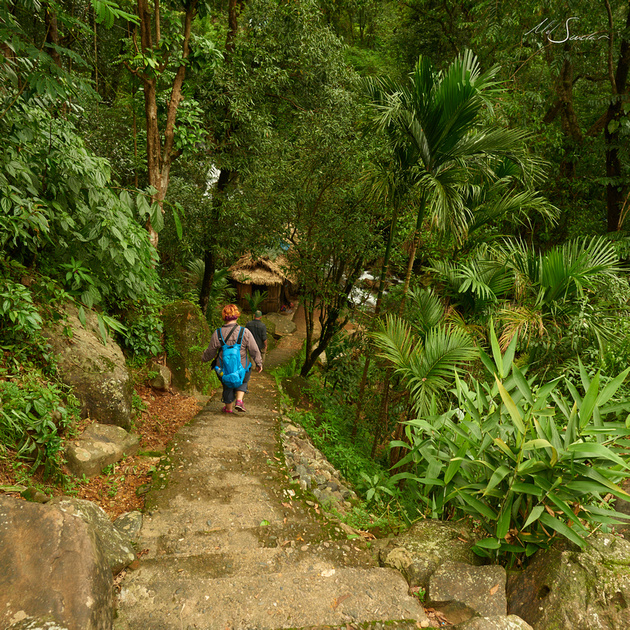 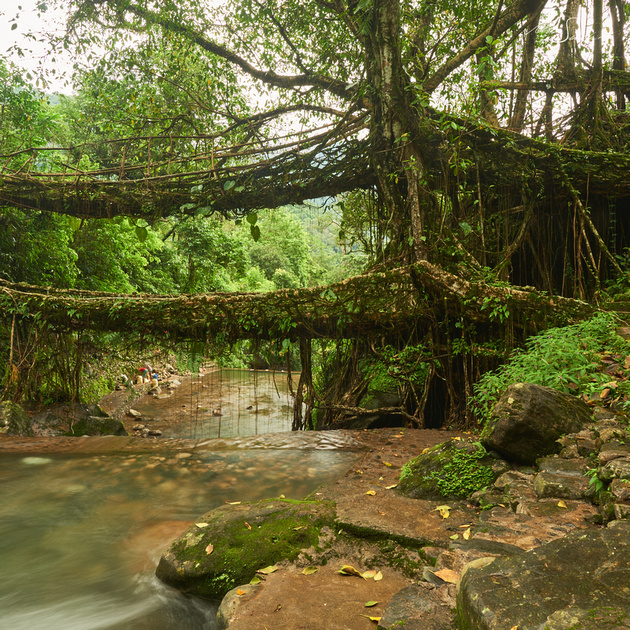 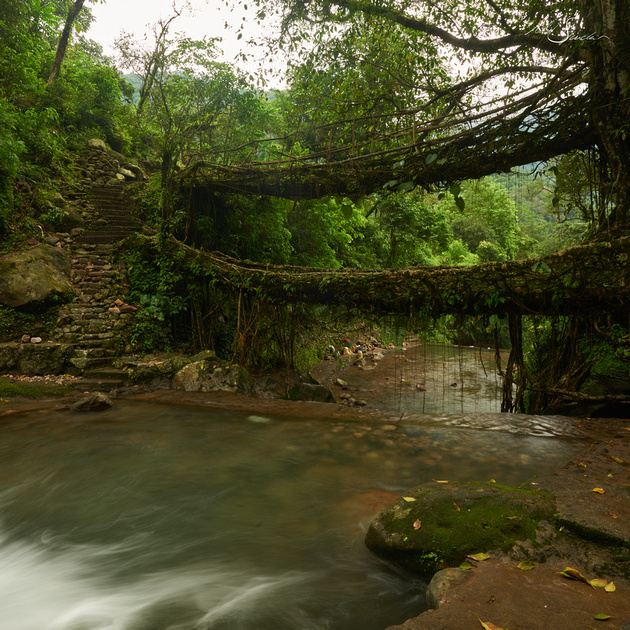 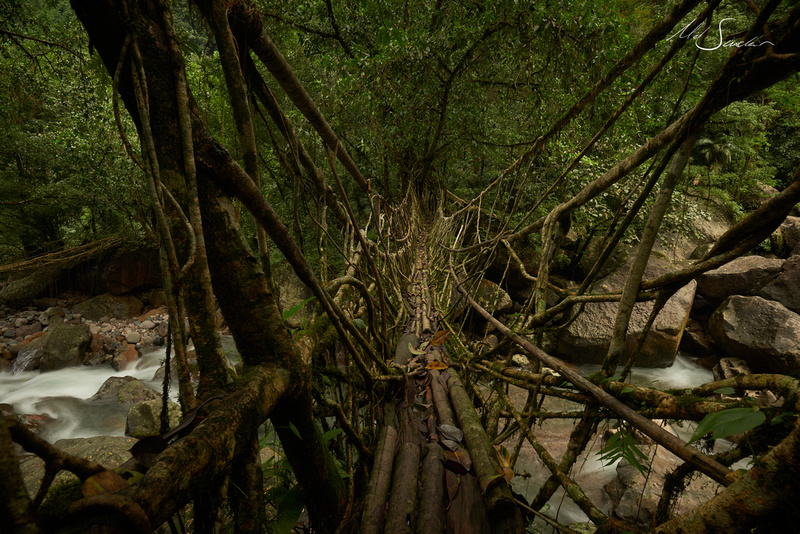 I was suffering for my art... and it hurt, I just hope I did the location its best.

The air was thick and soupy, the clouds were greying up and I could still see a mountain of steps in front of me, stacked up like dominoes. My head was pounding as if it were my heart, my face hot and exhausted and my eyes felt like they were bursting out of my skull. Up and up and up. One.Step.More. In a testament to her athletic ability, Miss Bev was ahead and had reached the top before us all, calling for the Taxi so that it was waiting for us when we all got to the top. Up and up, my muscles ached, my mouth was thirsty for a sip of cold water, but alas I'd have to wait. We bailed into the taxi like sacks of potatoes, utterly drained from the day. Getting out of the taxi to our accommodation, legs heavy and feet sore. I couldn't wait for a shower, even if it was kind of on the cold side. Anything right now would be refreshing.

After showers and clean clothes, different shoes, we gathered around the fire in the Bevs room and ordered in food from the restaurant to the room. We ate on the floor in front of the fire and got to bed early. Totally drained. That night, my feet felt as if they had their own heartbeat. Each step was like trying to break my arch and stumble into the bathroom, tiled by cold, uneven bits of slate. Tomorrow we'd be heading to Shillong, the starting point of our Rickshaw Run. It was to be a few days of getting the Tuktuk together getting our lives together and everything prepared for this mad race.

The internet here has been touch-and-go. Like a gypsy rolling in and out of town...