“I haven’t been everywhere, but, it’s on my list” – Susan Sontag 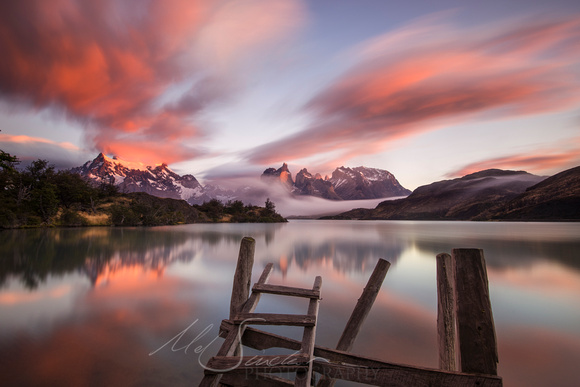 Castle In The Air

Today has been never-ending. It’s a hybrid version of Groundhog Day where the day just keeps going. Thirty-six hours now and it still isn’t even Thursday. I’ve gone twelve hours back in time, arriving here with only four hours sleep, two hours after I left Australia. I had gone so far beyond tired that I had surpassed zombie and had become mummified in a body just as confused as my brain.

My eyes were so bloodshot I wouldn't get served for a drink if I tried, my vague expression suggested that I did not have the IQ of a fully-functioning independent adult and, an odor that told the world I haven’t showered in as many hours that I could count on two hands and toes.

Rest was just a sound with no meaning attached, much less a word or action. It would come eventually in the form of a lovely hotel in Punta Arenas, but we just had to get there. The floor of the Santiago domestic airport had begun pulsating beneath my feet, the entire concourse was alive and felt as if it had a heartbeat. Mentioning this to the others, I received stupendous looks from Tim and Rob when I said such things, surely they felt it too? I passed it off as an elaborate trick to confuse me further. I was so disconnected from reality at this point that the act of existing, let alone taking snaps of the airport, was a struggle.

Arriving at the hotel close to the stroke of midnight after a crazy taxi journey cloaked in darkness, I am beginning to feel like two people. One who left home and got on a plane, the other who is beginning to form from a collection of leftover skin cells, electrical impulses and motivations involved in getting me to a shower and into bed. I am glad to make it to the room I am staying in after what feels like forever, and reunite with Clair and Vanessa and my beautiful, luscious, king single hotel bed which tells me everything’s’ going to be alright. I clumsily have a shower, managing to knock over everything in the room in the process before making a beeline for the bed, passing out centimetres before I hit the pillow.

I wake now fully knowing where I am, what day it is and where I am going. We are starting the first day of the One of a Kind Photography Adventures inaugural trip to Patagonia. After feasting wholeheartedly on the much-needed hotel buffet, my stomach happy to be receiving nutritious eggs, muesli, fruit and peach juice. It’s all just beginning to sink in as the group unites and we divide ourselves into the two cars; The Great Wall and the X-Trail, which will later come to have a new name. Purely by accident, us girls (Clair, Vanessa, Sarah and myself) are in the X-Trail with the ever-entertaining and clued-in Jake as our driver, and the guys (Craig, Jeff, Rob) in the Great Wall with Tim. 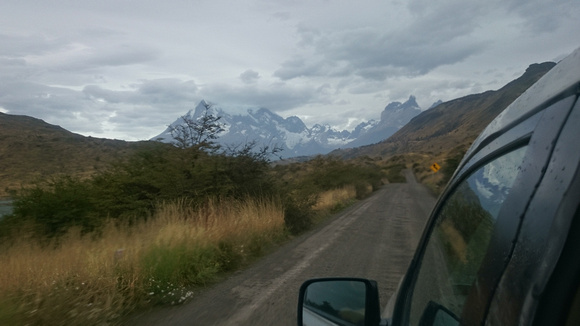 We drive north to Puerto Natales and then onwards to Torres Del Paine National Park, where we will begin our first shooting at Lake Pehoe camp ground. The drive from Punta Arenas to Puerto Natales is relatively benign, a few rolling hills, some local wildlife but mostly fields of nothing from a photographers’ point of view. We pass through town grabbing only coffees and a few snacks for the road, losing the other guys in the process.  There’s an interesting crossroad on the outskirts of town, where both left and straight ahead signs to Torres Del Paine National Park. We choose the taking a left turn (a shorter distance) onto dirt for what will turn out to be the longer way, but also the most scenic. 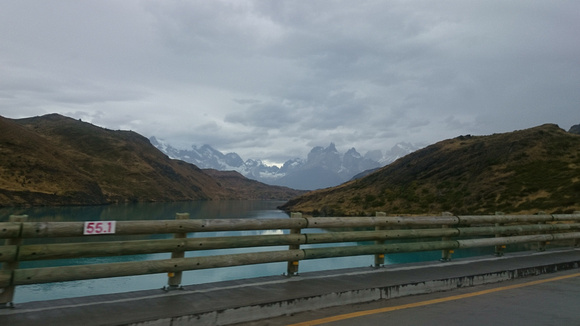 Without a GPS in a new country, we had only our instincts to go on. The car is a hive of excitement, we are in Patagonia!

A day in the car and all that scenery, we were frothing at the mouth to begin photographing it all, and made the short journey from our campsite to the edge of the lake, overlooking the breathtaking scene before us. We stand there for a moment united in disbelief, before the photographers' instincts kick in and we disperse to find a composition and a place to setup for sunset. 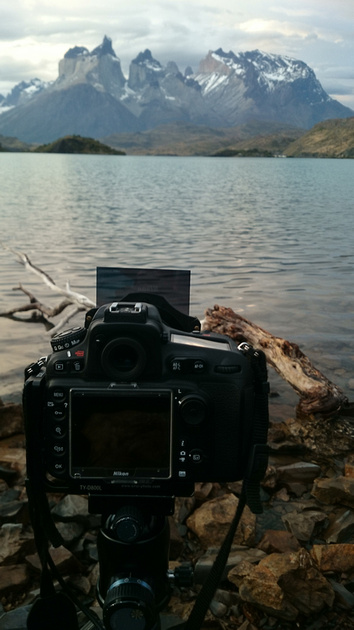 As the sun sank behind the domineering mountains, every moment presented a new capture, a new possibility. Intent on not living it all through the lens, I stopped to take it all in, a moment of meditation among the people zipping all around me. Collectively were stunned by the quality and intensity of it all, seeing it for ourselves, right there in front of us was a rather emotional experience. Overwhelming in fact.

Dinner was at the campsite restaurant, satiating our desire for a warm meal in a warm establishment. I headed to bed quickly as I wanted to rest up for sunrise the next day. Everyone had come away with such different images despite being almost side by side.
Empowered and overwhelmed, I crawled into my tent and sleeping bag and fell asleep not long after. Long day, so many things.

Tomorrow was the promise of more of it, I couldn't wait.