Today has been one of those crazy days.

I slept on a mountain, ate a Reindeer burger, flew over an eruption and saw the aurora! Only in Iceland I tell you!

My body bears the hallmark signs of such a day, aching and paining in certain parts, but I think it was all worth it...?

I stayed up late on a breezy cold mountain to see the fires of the Bardurbunga fissure eruption burning away in the distance like a beacon, taking photos like it was the hottest (pun intended) thing around – and it was! From sunset on Monday afternoon until late at night, surrounded by half a dozen people, the fires burned, the light changed and I caught some images I'll remember for my entire lifetime. 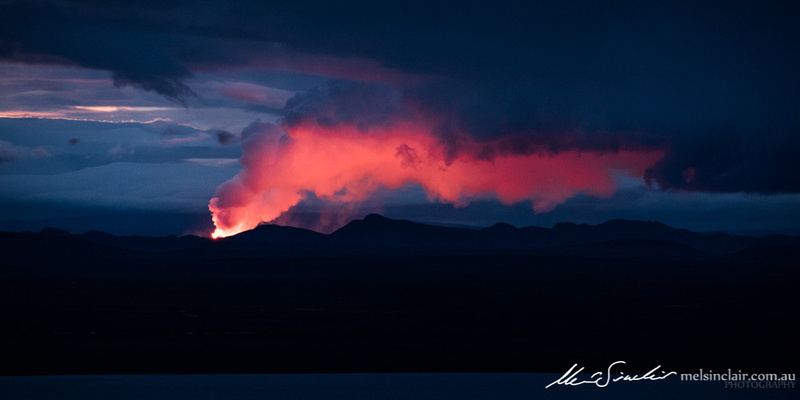 I woke around 6:30am at a hotel/motel high up on the eastern tableland, not far from Snaefell mountain. We had been scouting the afternoon before and happened to notice, almost immediately, how frigid and strong the breeze was. It was probably strong enough to use a kite as a paraglider, much to our disappointment, as we had planned to camp. But thankfully an oasis was there for us, tucked away from whence we came, was a little tiny hotel, now in its low season. With an on-site hot pot (which I never had a chance to use – Josh did), it was the perfect place to avoid the nasty wind and sleep in comfort. 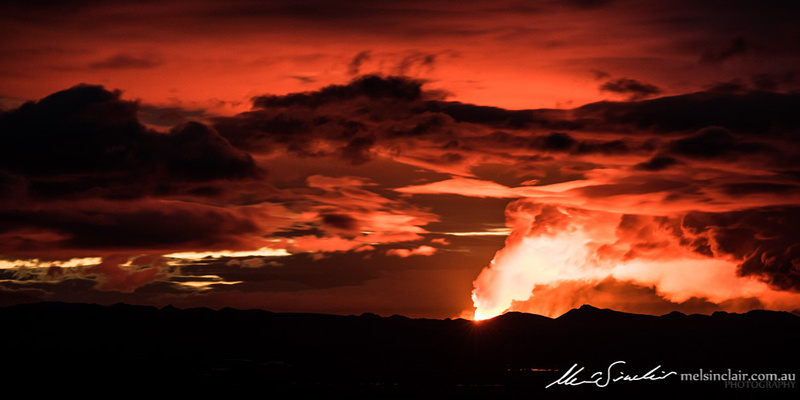 The owner had told us of a place to see the eruption from, quote “the fires” that was as close as we could get to without entering the restricted zone – and still be able to SEE the eruption. Giving us a short talk on the road condition and checking to see that our vehicle could make it, we set off into the setting sun, in search of the promised glow. As it turns out, he was exactly correct, as we neared the top of the mountain, there she was. As there was only so much we could do, we left around 9:30pm in search of our beds. For the record, the sun is setting around 7:15pm and blue hour is finishing around 8:30pm, hence these really late nights!

Bardurbunga Fissure Eruption from near Snaefell, 2014

Checking out early in the morning and thanking the hotel owner (I've got a mind blank on the hotel/owners name atm) we headed back towards Egilstadir in search of breakfast and then to head onwards to Lake Myvatn. For you see, we had booked charter flights over the eruption site for today, after looking at the forecasts for clear and sunny weather.

But first, lunch. There wasn't much to choose from at short notice, so we found a local bistro and each had a Reindeer burger, the special of the day. Keen to add more animals to my list that I have consumed, I jumped at the opportunity to finally try it. I quite liked it, game-ey and rich, but full of flavour much like lamb. Delish!

And then, then it was time for our flight.

Let me preface this by saying that I was never afraid of flying, I never had an issue with it, unless there's turbulence, and then we have a problem. As far as the world of Aerial Photography went, I was pretty brand spanking new to it. Having heard rumours that longer lenses are best, I chose my 70-200 f2.8 for the D810 and the 16-35 f4 for the D800. I was unsure at the time, but the lens/body combinations paid off!

The plane was a small Cessna 206, a full compliment of 5 passengers plus the pilot. 6 of us humans crammed into this really small space, the seats had lost their padding and was like sitting in a racing seat. Space was limited, I was thanking my lucky stars that my lens was internal focusing and didn't protrude like cheaper zooms, as there just was not any space left. It was an effort to move around to shoot out the window, a reason, I suspect, as to why I currently have sore shoulders and lower back.

I figured out a way of twisting so that my left shoulder was my tripod, therefore steadying me from all the lumps and bumps of the ride. As I have now learnt, this has future consequences... ouch!

The flight was routine until we approached the lava field. I remember wistfully looking out the window observing the steamy patches where the lava met the river, and then bang, I remember all my gear flying up, my seatbelt straining and having one of my cameras hit me in the lip, but not enough to do much more than hurt. Air pockets, two in a row. I felt the blood drain out of my head, a sense of fear building in my stomach. Our pilot was skilled enough to get us out of it and continue on, having a chuckle about how fun it was to fly around the eruption. I felt as pale as a sheet, I'm pretty sure I looked it too.

That said, it didn't ruin my shots or my focus. Having gotten through the brief tumble, I found the breath and the focus to fire off 600 shots for the flight, the magma fountains were mesmerising. They shot up at different intervals, some containing more rock than others, but always intense and simply breathtaking. I know I've ticked something massive off the bucket list to have seen all this! 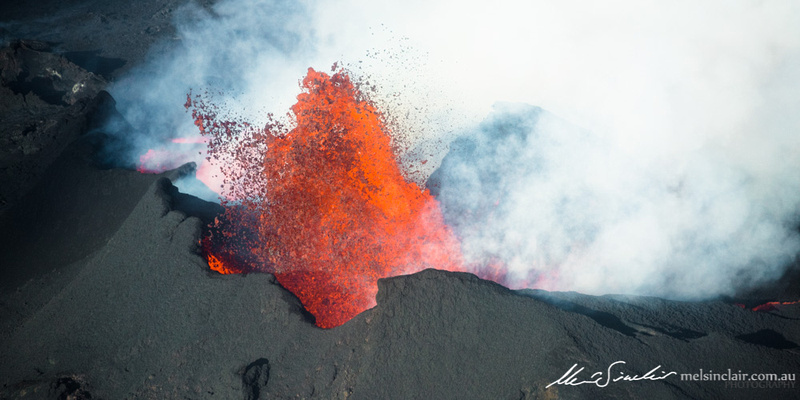 I simply cannot describe how amazing it was to see. The plane would take side passes of the eruption, as the fissure was 1km long, it gave us some time to see pulsing tall fountains of molten magma, shooting through the rock into the sky. It just took me to another world to see it like that, so raw and real. Reading about it, and seeing it are two different things, worlds apart!

As a side note, having the D810 has been an absolute godsend. It's capable of so much more than the D800, I know reviews and everything will tell you that, but the highight metering mode absolutely saved my bacon today, and no doubt made my shots just so perfectly exposed. Shooting in high speed continuous mode helped as well, but i'm so bloody impressed with the quality of images coming out of it, even at higher ISO speeds. I always was a Nikon girl, feeling so blessed to have this new body!

I have so many photos that I have yet to look at in any great detail. This is intentional however, as I want to save a little bit of the excitement for when I get home...! 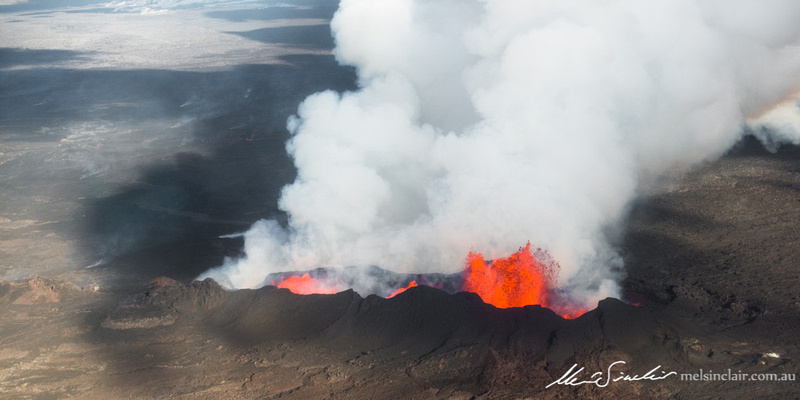