Day 3: A Whole Lot Of Walking!

I have come to the conclusion that all photographers who are serious about their craft like pain and do crazy things....

Last night towards the end of our first nightly seminar, whilst discussing nightly plans, the arrival of the aurora australis was hot news and forth we spread without a second thought, into our cars and down to the lake.

It was a mostly clear night a few stars hanging low in the sky, a gentle but frigid breeze wafting through the trees. It was forecast to hit -1C, the coldest night of the entire week. Yet still we all got out there, even if there wasn't much to see. There was a suggestion of clouds on the horizon, but we were there to try and catch the elusive glow of the Aurora, which was proving difficult given the cloud that was making its' presence felt like the awkward uncle at a dinner party.

Eventually after giving in to numbing digits and limbs, plus the knowledge that some of us were actually going to get up for sunrise, we decided that as nothing had shown itself by 11pm, that it was well and truly time to go to bed.

Sun rises at 6:49am down here, rather late compared to where I come from in Queensland.

It was being tossed around that last year, we never actually got up for many sunrises or sunsets, as the weather is usually rather cold and most would prefer the extra sleep. So naturally, at the ripe early time of 5am, I rose from my warm electric-blanket heated bed, and put on all my clothing ready to head down to Dove Lake for sunrise. Knowing it was going to be cold, I put on every layer I owned, thankfully I was toasty warm all morning.

Sunrise as one would have it, was jaw-droppingly amazing. We had the low cloud drift across the peaks, separate into lines and then proceed to go pink. I've only ever seen one sunrise like it before... absolutely stunning and worth the lack of sleep.

Mieke, Karl, Wazza and myself were all in a small arc around the famous cradle “rocks” and boat shed. The happiness between the lot of us could have been packaged and sold, it was in such abundance that we were happy for the rest of the day....

After sunrise, I had half an hour to change my clothes over, my gear over, have breakfast and get out the door. As it would soon become apparent, I had taken the priority of eating over making sure I was packed properly.

Our walk started from the Dove lake car park, as every walk does, and up Hansons peak towards the Twisted Lakes... a series of lakes surrounded in fagus bushes and other trees twisted and warped by continual exposure to the harsh winter elements, for nine months of every year.

The ascent to the peak was rough, jagged-edged boulders lay in place of a real concrete step, wet and slippery with mornings' dew. Every step was a gamble – every rock was different. Often there were many options for the correct foot position, but it was up to you to decide whether your shoes would hold, whether you'll roll your ankle on that step or whether that tree root will hold your weight if you use it to pull yourself up.

There were then other important decisions such as whether to walk through the water or around it, how much mud could your shoes take and how far can you legs go from each other before the crotch of your pants decides to stop you or give in. the walking sections were steep, often tempting gravity to take over and pull you down the hill without a moments notice.

All of these decisions meant that I was constantly looking down, just following the path. This of course meant that I never really got to see much around me, but there wasn't much to miss, the entire mountain was shrouded in fog, a far cry from the beautiful morning that had just been. 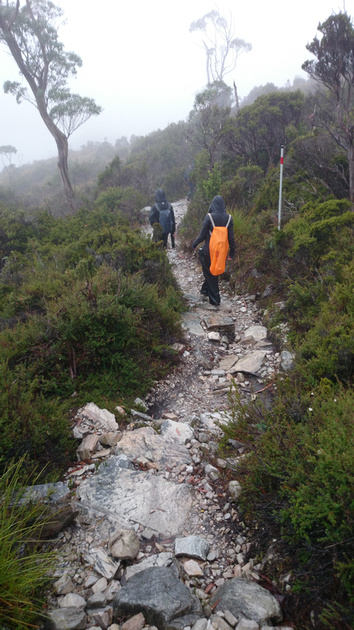 12,000+ steps later (according to Scott who was walking with us) and around 7km of paths travelled, mostly in the misty, raining tundra, we arrived back, wet, sore and swearing that we were all crazy. I finished the day with everything wet and cold, as you do...

I swear on days like these that Cradle mountain is an old cranky woman, her moods shift and change. One minute you'll love her the next, you'll hate her. But that's the way it goes, better than lottery?

I was most defintiely feeling alive, and battling the uncomfortable middle ground between being too cold, and then being too hot under my layers. It's so hard to get right.

So now, more than ever, I'm convinced that photographers are Masochistic Geniuses.

Because hey, every genius has an element of crazy inside... right...?

Kane Gledhill(non-registered)
This line sums it all up Mel. "I have come to the conclusion that all photographers who are serious about their craft like pain and do crazy things...."