I don’t know the meaning of the word “Jokusarlon” in Icelandic, but I think as a rough guesstimate, it would mean “Holy Shit Amazing” in English.

I am amazed and in awe of the morning we were treated to, the fact that I got to photograph it AND – the important AND – I’m happy with my shots! Thank you Iceland for finally giving us some weather we can use!

That’s not to say we’re not going back – we are! I’m keen to check out some other vantage points and play “chicken” with more incoming waves over the icebergs. Such actions resulted in me walking around today with one wet shoe, and I got some of those shots where it’s mostly the subject matter, but also a picture of “grabbing-my-camera-and-escaping-salty-water-certain-death”.

I’m at a loss to describe the beauty of what I saw, so I’ll communicate with pictures..

We had long lasting pinks, oranges, blues and yellows. We had glass-like reflections. We had black sand, white water and blue icebergs which helped create a dramatically different landscape from what I’m used to in Australia. It was mind-blowing. I’m curious to go back, to see if every other morning is like that! 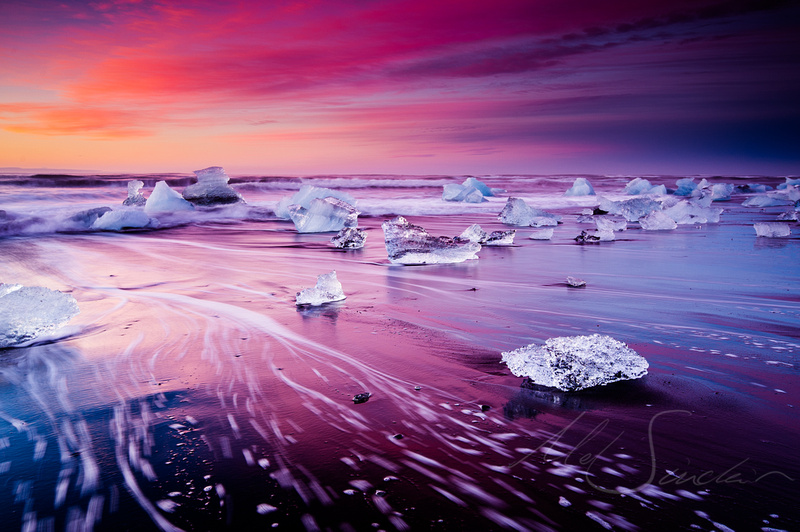 We arrived at 4.30am, sunrise wasn’t until 6.30am. By this time it was still dark but the icebergs that had washed up on the black sand beach were visible. Taking a shot this early seemed impossible thanks to my D700, who used to be able to (as my good friend Jasin says) “See in the dark like a cat on carrots” however this was not the case. It had clearly gotten up on the wrong side of the bed and refused to focus on anything for me, resulting in some choice “French” words directed at it. After it recovered from its’ hissy fit, it worked the way it was supposed to… mostly. My D300s is since getting a little more attention than it used to.. but still.. it’s no D700… Who wants to buy me a new camera? Now taking donations…

Anyway, back to the amazing photography. We spent most of the morning, from about 4.30am to 9am at the lagoon (Jokusarlon is a Glacier lagoon) and then proceeded to head towards Skaftafell National Park where another waterfall was awaiting us. This took longer than usual as we stopped to photograph other glacial lagoons that come off the same Glacier (Vatanojukull) and what we’ve termed as “Roadfoss” meaning road-side waterfall with no previously allocated name. Taking a lunch break after this was called for, after our small-cliff scaling to get into the waterfall. We then finally got to Skaftafell, finding it was a 1.8km walk uphill with an incline of 140m. I was fine to do this, however, we decided to drive to the tourist-dropoff point, 1km into the walk. It was still steep and unbecoming as we lugged our 20kg+ backpacks up the hill, plus tripods. Brisbane photographers : Think, taking a bag of gear and pod up Wildhorse Mountain and you’ve got a close comparison to the physical gumption required to get there. I can see myself spending more time processing my shots from Jokusarlon than any of the trip pictures thus far. But with an estimated 10,000 plus to sort and cull by the time we leave, I think that I’ll definitely have my work cut out for me for the following month. I told myself that I’d not do too much processing on the run, but with the amazing things we’re seeing, how could I not. For that reason, I know this screen I’m working off of is a bit pink sometimes, so, as previously stated, these pictures are not the final edits. I’ll release those as I work on them once getting home to the master machine.

But for now, it’s time for a shower and a good nights’ sleep. More Jokusarlon in the morning, more things to check and do. We’re halfway in the trip now. 10 days down and 10 to go. Time flies when you spend it pressing a shutter button…