It's been a while between blogs, I haven't felt like I've had much to say that others would want to read. I guess I should get out of that mindset, I do enjoy writing even if I'm not as good at it as I used to be.

I wanted to write this while it was still fresh in my mind, so as to not have the message or the images forgotten, or lost in the noise of life.

This is the blog of the story behind my entries from APPA (Australian Professional Photography Awards). While I did not receive any professional awards for these images (sadly) they scored among the “High professional practice” grades. Essentially meaning that I’m on the right path, but they weren’t quite “finessed” the way the judges wanted.

If you have been following my story since my house fire, then listen up, this is a part two to the blog Curve Ball. If not, I’ll leave it up to you whether you want to read it. The short of it is that these images and the creation of them, was a kind of therapy for me, of sorting out the tangle that I have been going through, and will be for some time. One of the biggest struggles is that people automatically assumed that because X time has passed, I must be good now, functioning and over it. Definitely not the case, but there’s slowly more good days than bad days.

When you lose everything, you really lose more than you think you will, and not all of it at once: - your sense of identity, your place in the world, your confidence in what you do… it opens itself up as questions when you don’t need it to, and it sent me into a tailspin of trying to find my place in my world, again.

So it seemed only fitting to tell my story in images, to try and convey the sense of confusion, frustration and often idiotic things that occurred. Each image represented a feeling, a packet of shit in which to swallow and just “get through” as best I could. There’s no guides on what to do, how to handle it and how to talk about it, so here goes. 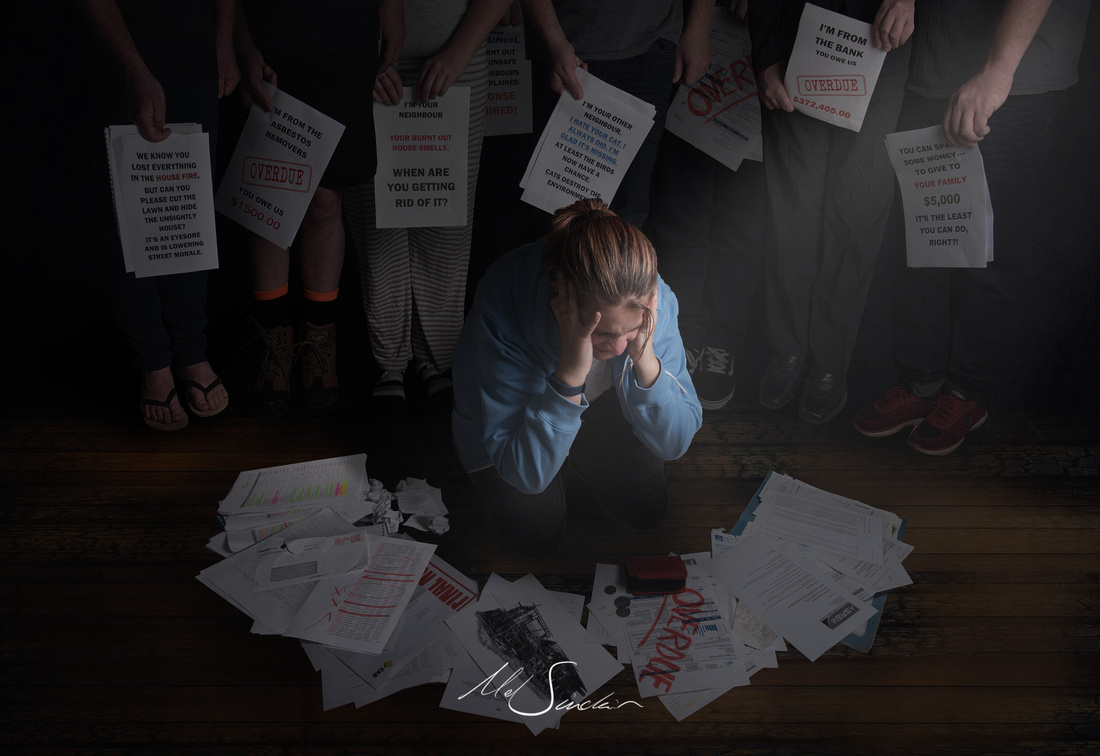 Have you ever had that feeling of being totally hounded from every single angle? Relentlessly bothered, reminded, pushed and drained to the point of madness? That’s what this image is about.

Some of the statements in the back are true, and some are false or exaggerated, and it all begins to blend in and mix when you’re just so endlessly nagged for things. It’s hard to find any kind of positive, when things are just on such a downward spiral.

You’re spending money to live, but it just feels like it keeps draining from you, for months on end, for all sorts of reasons. People take cheap jabs at you because they feel entitled to do so, because instead of sympathy we’re in the generation of “what’s in it for me?”. Some of the old neighbours took cheap stabs at us, believing that if they complained to the local council enough, that they’d be forced to step in to help us. Ha. Funniest thing ever because the council does not help, it just sends more nagging, threatening bureaucrats to further torment you until you roll over and say “yes.” 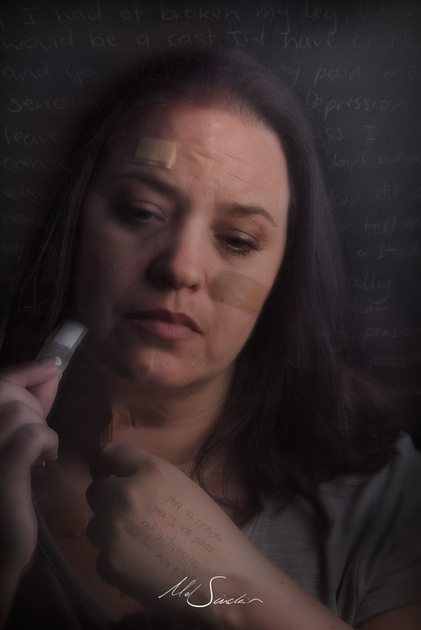 Scars is a reaction to our treatment of mental illness and the unseen nature of it if you’re not a self-harmer. Too often we see a person but because there’s no wounds, no scars we assume that they’re OK. My common feeling here is that if I had of broken my leg, there’d be a cast and you’d be able to see that my body is still healing. With mental damage, the thoughts, and inner demons never really leave you alone, and you feel damaged and isolated. The idea behind this was to show a feeling of experiencing this, because you can’t apply a dressing to a mental illness. Band aids are the thing we put on damages to our body, so someone applying these to their mind could also be understood to still be healing. 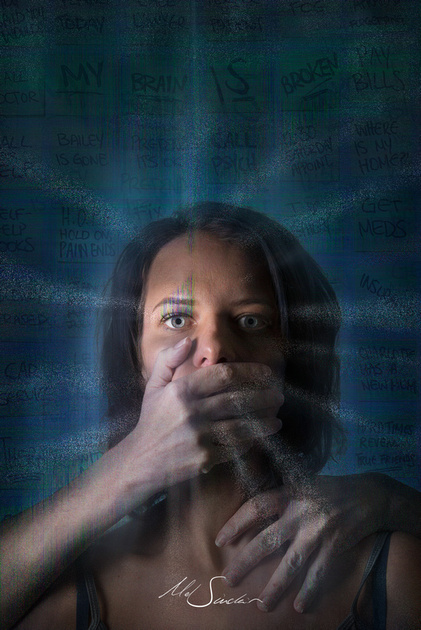 This is a big one.

After the trauma, things are so very messed up in the mind.

In the attempt not to forget, the brain will remind you over and over and over again to make sure you don’t forget what happened. But this also erases vital function stuff. Remembering to do some silly little things, reminders of what has changed, even down to cooking dinner and making sure you are where you have to be, in order to conform to daily life.

It all gets blurred and lost in the mix, it’s hard to remember, retrieve and use for later. Short term pain, long term pain, it’s never easy and took me around 5 months to fully get over this part. 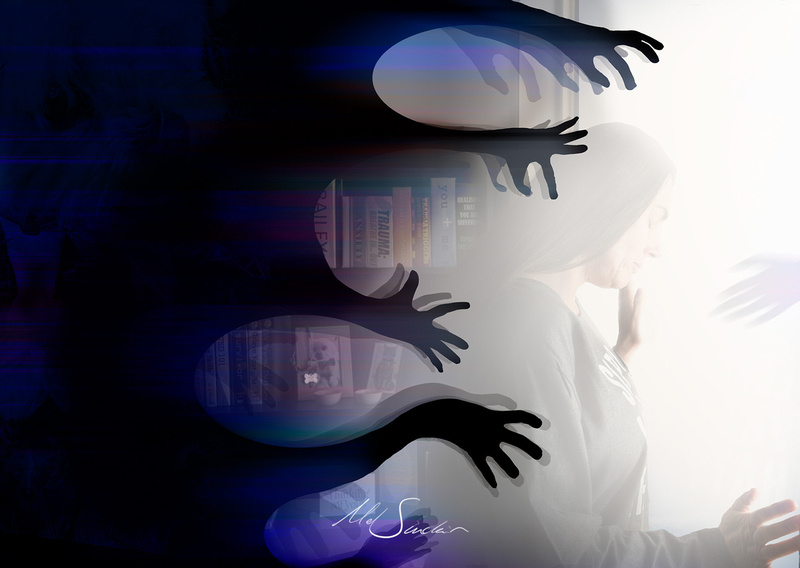 This is another big one that I simply think that I overdid in the “holy crap it’s too simple” feeling I had during the creation, so then I went and added more stuff that just cheapened it in the end. But with all things comes reasons, and I feel like the judges didn’t have the time required to read the image the way that I had intended.

Darkness is an implied situation, the hands aren’t real in any sense of what we take for being reality, but they’re very real for the person at the window, trying to escape their grasp. They want her back, in the darkness, not caring about anything except the darkness. They’d be happy if she was on the floor, melting into her sorrows of losing her pet, focusing on how alone she feels without him and not moving forward with any kind of assistance. When she feels like she’s strong enough to break free, there’s only one offer of help, on the other side of the window, and she doesn’t see it because she’s shut her eyes to imagine what it’s like beyond that darkness.

It was remarked that it was too cartoon-ish for a serious issue, but that’s just it – how do you show something that’s not real without taking it into a cartoon style. Something I'll have to work out in time with my muse and talking about the issues more widely.

The concepts will get reinvented, the images perhaps. I'm not entirely sure at the minute.

I’m determined to keep going with it all, to push myself more and recover from not achieving what I wanted to achieve, that's hardest part.

Feel free to leave a comment and mull it all over, I'd love to start a conversation about these emotions and situations, I get something different out of what people have to say.