I had been looking forward to Wednesday Waterfalls with Brett Chatwin ever since I even got here. After seeing some tempting shots of local waterfalls, I was more convinced than ever that I'll want to see as many as I could while I was here.

Brett took us (Warren, Kenny and I) out mid morning to catch the falls. Naturally, as it would seem cursed, the morning was bright and sunny, completely the opposite requirement for good waterfall shots. Luckily, the clouds got their act together and shaded us in, providing the perfect sky coverage for such shooting conditions.

It was a great day out, the green of the forest is so intense here, unlike Queensland, the rocks are mossy and vibrant, the forest seems untouched and still. The track leading from one fall to another was scattered with leaf litter making the footing loose and treacherous in parts, but all of us came out of it okay.

It was so serene in the forest. I managed many delicious shots, images I'll cherish in my portfolio for ages to come. I must thank Brett again for his efforts!

On a more serious note, one of our group, Kenny, was a bit complacent with his camera, which most certainly contributed to a less-enjoyable, and heart-in-throat moment for all of us. I just happened to be taking video at the same time, but it proves that you must always be careful of your gear in the field, and never, for one moment, think it's safe, especially if you're standing on a large mossy rock in the path of waterfall spray.

Lessons learned? Only time will tell.

Today, something I have always wanted to happen, has happened.

IT SNOWED ON CRADLE.

It snowed enough to take shots of the mountain lightly dusted in a white powdery coating! 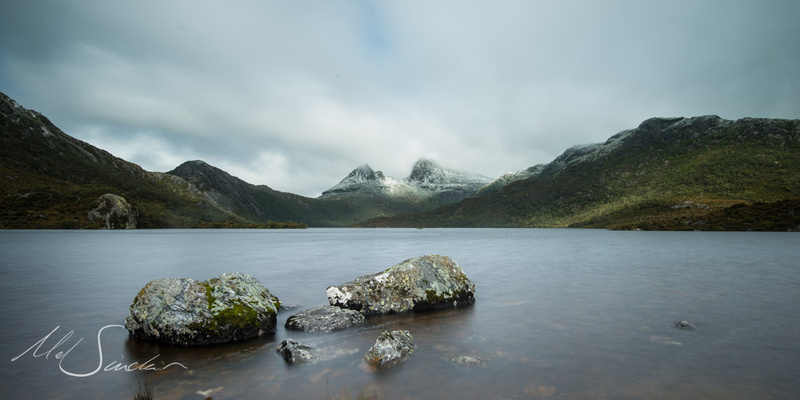 I just could not believe it, I was going absolutely nuts at the sight of snow outside the cabin. There were different sized flakes all coming down in great wafts and floes, whistling their way around the cabins like dancers following a tune. I was in awe.

As someone who lives in a tropical climate such as Brisbane, snow is not something that I have had to get used to, and nor do I want to. It was marvellous to see it arrive before it was due at 10am! It was decided unanimously by everyone that we didn't want to walk in it, as it was blizzard-like and so so cold, but still, Mieke and I made the effort to head down to Dove lake to see what we could get.

We sat in the car and waited for the tiny blizzards to pass, it was too cold and ferocious at times to even think of getting out of the car. We watched the snow build and fall on our cars' windscreen, and when we got out it was hilarious, for two girls who come from warm climates, to see snow built up on the vehicle!

Oh it was so beautiful. The snow clouds were still dusting the iconic peaks with more of the good white stuff when we got there, and intermittently throughout the few hours we spent down at Dove Lake. My hands were frozen, cold and red, cracked where my skin has been drying out. But the inner flame of happiness and adrenaline was pumping. I felt so alive!

It felt completely unreal to have such a weather contrast, I'm still pinching myself over it! We've really seen it all this week, from amazing sunrises, mountain moodiness and now snow, a big tick off the cradle bucket list. Not as heavy as in winter, but hey, I'll take what I can get!