Focus On: Kane Gledhill :: A Tribute To The S.S Dicky 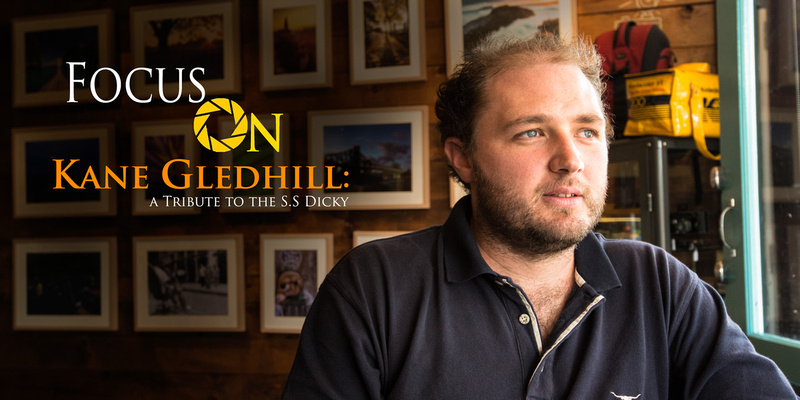 Back in 2009- 2011 Kane and I were two members of a four-strong group. Together with Matthew Stewart and Josh Robertson we traveled to some pretty far corners of South East Queensland and New South Wales in search of the perfect light and locations. I’ve always admired his continual drive to photograph Brisbane. We caught up and sat down to have a chat about his new project…

M: So Kane, for those out there who do not know you, tell me a bit about yourself?

K: Since I was very young, I’ve had an interest in photography, which I owe to my Grandfather, who was a successful painter. I’ve always loved the outdoors and the elements, taking photos of it was always a second nature. I am completely self-taught and have spent countless hours exploring South East Queensland and Northern New South Wales for the perfect images for my collection.

M: When did you get interested in Photography, what did you shoot with?

K: Whilst I was growing up in New Zealand, I picked up a Vivitar v3000 with various lenses and accessories. I began shooting with film to develop my creative style and to learn how to see the world through a lens, it became a productive, albeit expensive, past-time . On my meagre wage as a teen, this soon became rather expensive to pursue, but I pressed on roll after roll. In 2003, I purchased my first Digital SLR camera – the Canon 400D – and I never looked back... Not until recently when I rekindled my passion for film photography and acquired a Panoramic Fotoman 617 and a Schneider 90mm lens.

M: Do you have a slogan, favourite saying or belief when it comes to your practice?

K: I have always believed in chasing the light in all its’ different forms, as it presents itself in the most striking kinds of ways. I think the strongest belief in my practice that I have, is that I want to capture all these scenes, so that I can show my kids when they’re older, show them parts of the world they may never have contemplated – and may not exist by then. That’s what it’s about – preservation and creativity entwined with that.

M: So tell me about your love of the S.S Dicky Shipwreck? What about it inspires you?

K: One of the first times we went to the dicky, instead of doing a sunrise, or something expected, we did a night shoot. Rocked up, middle of the night, high moon. Shot it all through the night, slept on the beach, stayed til sunrise.  We were fighting with each other because there were limited spots, soft sand, shadows on the beach. There was this strange sense of ownership that night, we showed up first, as other photographers rocked up from Brisbane in the morning, that quiet fight intensified and eventually we gave in.

Everyone edged closer moving slowly, with every footstep in the sand changing the ‘preserved landscape' - gradually, less and less became pristine and beautiful. We knew the tide wasn't going to wash them away, it was as if someone had drawn an invisible line in the sand, we didn't cross it. That would have been sacrilege.

The dicky is like a graduation, a rite of passage, for those who live in Brisbane and the general area, and sure, you might drive an hour and a half, depending on where you’re coming from, but it was that effort that gave you the gold star.

Looking back on it, that’s when I fell in love with the dicky. It eventually became “the cool place” to shoot and it lost its lustre, its appeal. I instantly knew it had so many possibilities, tidal, sun, moon, atmosphere, sunset, storms… I still haven’t got a storm shot there and I kick myself for it.

The S.S Dicky by Kane Gledhill

M: What are your thoughts on the slow degradation of the wreck?

K: I didn’t think it’d ever disappear but I kind of knew that it’d always change. I guess, one day it will disappear, which will be a massive change.

Now, it’s just a steel skeleton, the centre poles are gone. These days you’ve only got the back section, there’s a little bit of nose cone and the back triangle section. But that’s on a deep sandbar, if you want to get anything awesome now you’re going to be in the water with the waves and uncertainty. It’s amazing how it (the back section) wasn’t the first part to go. Getting close to it was always so risky with the way the waves would break onto it, then rush up the beach. You had to have a sixth sense for predicting the movement of the ocean. It was such a simple easy pleasing image to shoot, it was about moon, ocean, atmosphere and the speed of the water with a longer exposure.

I’m waiting for the right conditions to get a shot I’ve been planning ever since I bought my film camera –a nice moon rise on a calm evening. Murphys' law would say that I will be waiting a while!

It’s such a shame that it won’t be there for future generations. But that’s what this Tribute page is all about.

M: Do you think it should have been preserved?

K: Of course, I always wondered how much longer it’d stay there before the public-safety conscious would raise concerns about its’ rusty bits poking out everywhere. I’m not surprised, but I’m saddened that something wasn’t done sooner to ensure it could stay. I will be keeping an eye on the news to learn of any developments with its’ removal. I hear locals want the remainder of the wreck installed as a public memorial to the Dicky and the beach (the only in the world) named after it.

M: Tell me about your Tribute page?

K: The idea came to me about a year ago, after a meet up Simon Beedle and we shot the dicky with our film cameras. We talked about how the Dicky had lost its appeal, due to a mix of popularity and moving onto bigger things. However now, we’re stuck because we didn’t pay enough attention to it, and now it’s going. I was meeting Simon that day to shoot the Dicky, but the last part of the front section had been washed away that morning… so I didn’t bother.

My tribute page is dedicated to the photographic preservation of the S.S Dicky’s memory. I want to show a progress of change from when it was first run aground, to the current day and the current condition, but also a change of style throughout the years. It was the recent news that the wreck was to be removed, due to its failing state that has brought the need for this page forward.

But what I do want, is people to contribute their photos, stories and memories of the Dicky so that I can include them on my page. Details below. 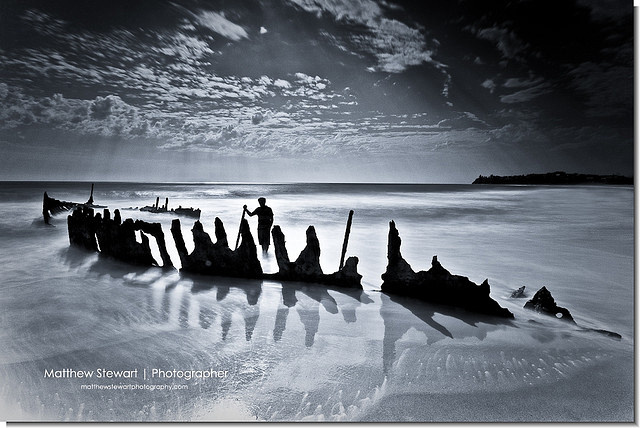 Fading In The Shadows by Matthew Stewart

M: In parting, a favourite memory of the Dicky?

K: I remember that shot that Matt (Stewart) and I worked on, where I’m standing like a captain holding the centre pole. I like it because we scripted it, we moved into a position to shoot it so that you could see the two central poles. The human form was inside the ship and we were careful not to distract from the ship outline itself. We did it in a way that it had maximum impact. It was kind of an outtake shot... A cool memory shot.

To contribute photographs, stories or to check out what others are posting, check out:

Please send me your images and S.S Dicky stories. Images will be added to the The S.S Dicky Viewer Gallery.

Or to see what Kane is up to, go to Kane’s site.